Tour books always seem to have a list of the “must see attractions” of each destination they cover.  Most times, I find they offer great suggestions of highlights but sometimes the most interesting places I’ve found have been through a friend’s suggestion, blogs I’ve read, or pure luck alone.  I would hit all of the Top 10 sights suggested by any good guide book – but if time allows, or you are looking for something not as crowded and a little more unique, check out some of these personal recommendations.

Tour books always seem to have a list of the “must see attractions” of each destination they cover.  Most times, I find they offer great suggestions of highlights but sometimes the most interesting places I’ve found have been through a friend’s suggestion, blogs I’ve read, or pure luck alone.  I would hit all of the Top 10 sights suggested by any good guide book – but if time allows, or you are looking for something not as crowded and a little more unique, check out some of these personal recommendations. 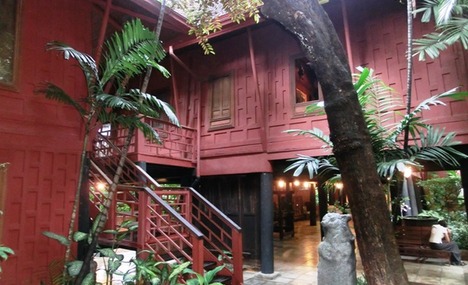 Somewhat difficult to find, hidden down what looks to be just another alley way off a major street in the Siam Square district, this beautiful residence turned out to be my favourite place to visit in all of Bangkok.  After a morning already filled with some sightseeing and the humidity climbing, we made the Jim Thompson restaurant our first stop for some much needed air conditioning, nourishment, and wine.  Not much more expensive than the restaurants we had eaten at earlier in the week, we enjoyed one of the tastiest meals accompanied by excellent service – a fine dining experience under $50 for 2.  Happily refreshed, we signed up for a tour of this half acre residence of the American who brought back the Thai Silk industry.  For 100 baht ($3), we joined a group of about 15 people and were guided through this beautiful teak house. Surrounding the house is a lush jungle like garden filled with ponds and benches to sit and enjoy the serene atmosphere.  It is a true oasis in the middle of the city. 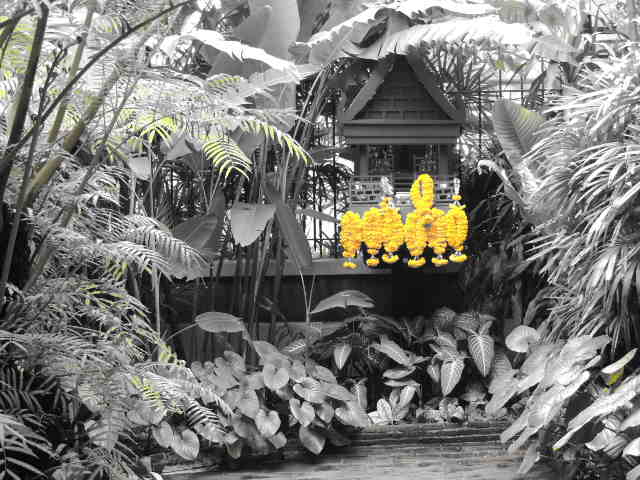 The house is filled with odd collectables, many items broken including buddha statues with missing heads, and cracked pottery.  Thai’s believe that having something broken in your home invites in bad energy and will eventually lead to a broken family – Jim Thompson lived on his own, his ex-wife left back in America and he had no children.  Fascinating in both his life and his death, the mystery surrounding Jim Thompson’s death/disappearance has never been solved. In 1967, Jim went hiking in the Cameron Highlands of western Malaysia, and was never seen or heard from again.  His brand is still well known, and his silk scarves, shirts, and home accessories make excellent gifts/souvenirs from Thailand…for yourself especially. 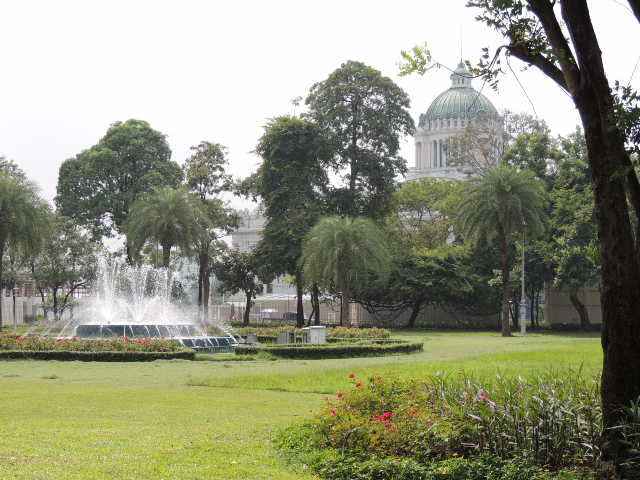 Truth be told, we didn’t plan on visiting this site at all…but thanks to the laws of serendipity, we found ourselves amongst one of many tourists awaiting a tour of the largest golden-teak building in the world.  Our original plan was to visit the Royal Elephant Museum at Dusit Palace Park.  I love elephants, and the idea of seeing even a picture of a white elephant was too intriguing to pass up.  If I write an article on the most disappointing attractions in Bangkok, the Elephant Museum would easily make the top 10.  But fate decided to have us arrive half an hour before the Elephant Museum’s opening, so we wandered through the park and came across the entrance to the Teak Mansion. 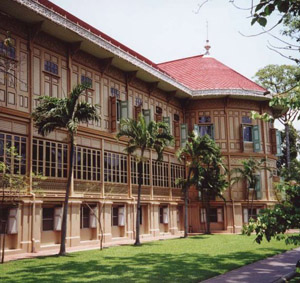 Our ticket from our visit to the Grand Palace earlier in the week allowed us free admission to most of the park’s buildings (valid for up to 7 days after your initial visit) , so we lined up hoping for an entertaining way to pass the time.  Lonely Planet advised the tours were mandatory, but the the guides at the front directing the visitors to the lockers to store their bags and cameras (no pictures inside allowed) told us we didn’t have to wait for a tour, and just to walk in.  We wandered between Thai tour groups through the 81 rooms, all built in 1868 without the use of a single nail.  The rooms are all decorated with fine antiques and collectables from King Rama V, and its easy to imagine living as royalty back over one hundred years ago.  We took about 30 minutes to tour the mansion, and were both surprised this museum seemed more like an afterthought than a highlight in the tour books we had read. A nice break from the numerous temple tours, the Vimanmaek Teak Mansion is one of my “must see” attractions in Bangkok. 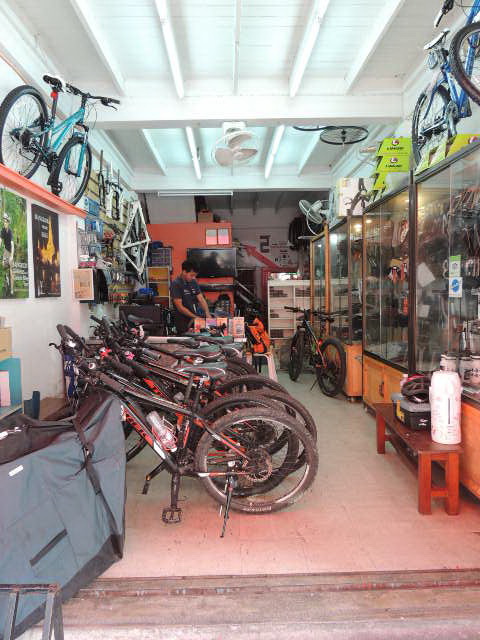 There seem to be a million different ways to see Bangkok.  Tour companies are a dime a dozen, each trying to win your business and attempting to make a name for themselves.  VeloThailand is no different, but they have partnered up with Urban Adventures and no doubt expanded their list of customers over the past year.  Always looking for a different way to see a city, I thought taking a tour by bicycle would be both a challenge I was up for, and a good way to see more of the city rather than by foot (humidity will keep your desire to walk to an all time minimum), while being stuck on one of the infinite number of tour buses trying to make their way through the congestion of the city sounded like a waste of time and money.  Thankfully most of Bangkok is flat, so riding is relatively easy.  With the exceptions of crossing a few major roadways, and avoiding sidewalks filled with food stalls and vendors, the risk of injury is next to none.  Bangkok is an incredibly bike friendly city, and weaving in and out of side streets, seeing a side to Bangkok that few tourists see, is worth the $40 for 4 hours of fun.  Read more about this tour on my article Bangkok by Bike. 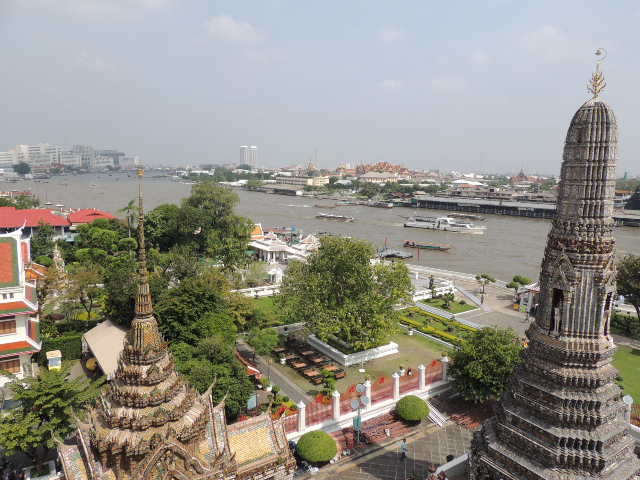 View from the top of Wat Arun, Bangkok

Temples in Thailand are a lot like castles in England.  The first few are awe inspiring, and you are take a ton pictures while trying to absorb all is beauty.  By the third or fourth one, you usually just take a glance or two inside and unless something unique catches your eye, you are all templed/castled out.  Wat Arun was my fifth temple of the week, and I meant to take a few novelty pictures and then move on.  We approached Wat Arun by bicycle as part of our Bangkok by Bike tour, so the temple sort of snuck up on me.  I was concentrating on not hitting pedestrians and not being hit myself by other traffic, when we pulled our bikes up to Wat Arun. I was awestruck by it’s magnificence.  A tower of colourful, intricate designs, Wat Arun’s many steps symbolize the accent to Nirvana – a Buddhist idea of a state similar to heaven.  It’s a steep climb to heaven – but we braved the stairs to enjoy the view from the top.  Wat Arun overlooks the Chao Phraya river and most notibly the Grand Palace.  Wat Arun means Temple of the Dawn and was built to symbolize the beginning of Bangkok as the new capitol. Worth the trip across the river, Wat Arun is my favourite temple in all of Bangkok – easily making my favourite things of Bangkok list. 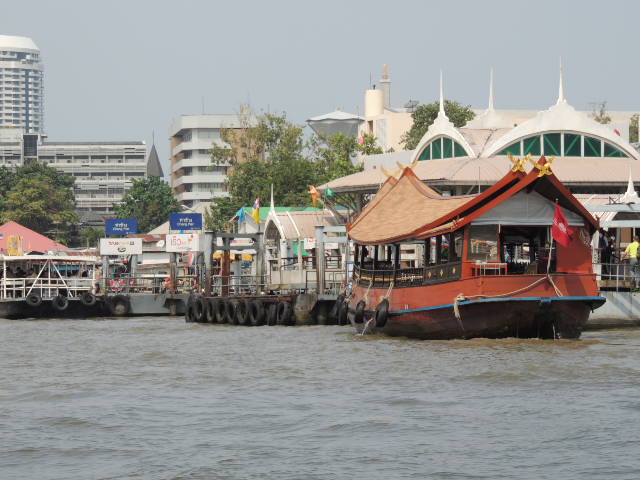 The confusing boat docks along the Chao Phraya river, Bangkok

The coolest way (sometimes literally and figuratively) to see most of the sights in Bangkok is by boat.  The Chao Phraya is the main river running through Bangkok that originates in the north of Thailand and empties into the Gulf of Thailand. Service along the river is frequent, inexpensive and insanely confusing for anyone that doesn’t speak Thai or live in Bangkok.  According to the map, we found ourselves at one of the boat docks close to the Grand Palace.  According to the same map, we figured we could take the Chao Phraya Express boat back to a dock close to our hotel.  We saw a ticketbooth and asked how much – 3 baht was the response…about 18 cents. Eagerly, and without asking too many questions (the ticketbooth lady didn’t speak English, so any questions we started asking ended with a puzzled look so we gave up without too much attempt), we walked through the turnstile and waiting on the floating dock for our boat.  The first boat came by heading in the wrong direction to where we were going, and we asked the man on the boat if this was the dock to head north.  He pointed to the set of docks next to us, and we sheepishly walked back through the turnstile and proceeded to the next dock.  A crowd of a few people were waiting there, so we hoped we were at least in the right place to start – but after a few boats came and went, all heading in the wrong direction for us again, we started to worry.  Crossing our fingers, we asked the man as we boarded the next boat if he headed north.  He just waved us on the boat, so we sat down and waiting for our unexpected adventure to somewhere to begin.  Without rejoicing too loudly, when the boat started heading north, we gave each other a somewhat geeky, but well deserved secret high five, and then hoped the boat would stop where we thought it was supposed to stop. Success was ours a few minutes later, and we jumped from our boat to the correct dock, feeling confident about our public transportation adventure on the waterway.  **side note – this boat ride ended up costing about 40 baht each, instead of the first boat’s fee of 3 baht.  Still have no idea why there was a difference, but for pennies, I really didn’t care.  A cheap, easy, fun and confusing mode of transportatation, it is still my favourite way to move around Thailand’s largest and busiest city.