The Toronto Blue Jays baseball team have made some exciting changes this off season, and the anticipation of seeing the new additions to the team in action wasn’t something I wanted to wait until April to see. There was also the fact that I was ready to do anything for some sunshine and warmer weather, so my girlfriend Kim and I decided to book a flight down to Tampa, Florida for a few days and check out Spring Training 2013.

The Toronto Blue Jays baseball team have made some exciting changes this off season, and the anticipation of seeing the new additions to the team in action wasn’t something I wanted to wait until April to see. There was also the fact that I was ready to do anything for some sunshine and warmer weather, so my girlfriend Kim and I decided to book a flight down to Tampa, Florida for a few days and check out Spring Training 2013. 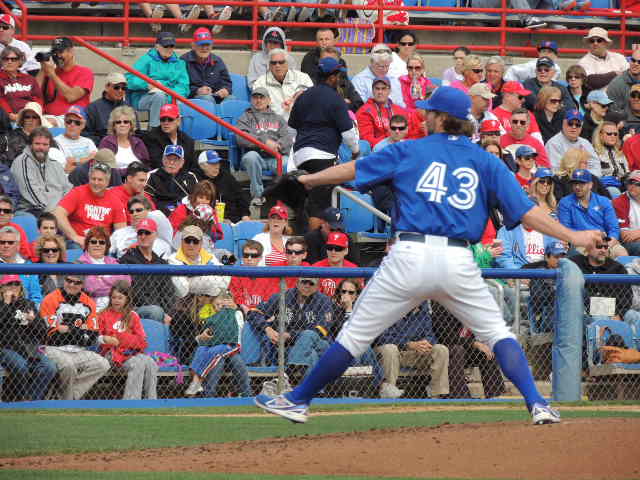 We started planning late last year, after the Blue Jays acquired R.A.Dickey from the NY Mets – the Cy Young award winner, and a unique knuckleball pitcher. After a few days research checking out flights from Toronto down to either Tampa or St. Petersburg, I found booking 2 separate one way flights on different airlines offered both a better final price, as well as better options for flight times. Since our time was limited, we booked a morning flight on the Wednesday arriving mid afternoon in Tampa after a short connection in Atlanta. The price on Delta airlines, booking directly with their website – $175 including all taxes and fees each. Our return trip home was on United Airlines, again booking directly on their website. Leaving on the Sunday mid morning, a short stopover in Chicago and arriving just after 4pm in Toronto. Return flight home…$150 including taxes and fees each. On both flights there were hidden bonuses despite a bit of stress getting them. On the way to Tampa, our original flight was cancelled due to a winter storm that cancelled most of the morning flights out of Toronto. After only a minute on hold with a Delta representative, we were rebooked on a flight leaving at 3pm arriving in Tampa at 9:30pm. Disappointed we were missing 6 hours of much needed sunshine, we were still happy to be leaving the same day. Our disappointment turned to pleasure when during the second flight of our journey, we were upgraded to Business Class. I’m not certain what a normal Business Class seat would cost, but I considered the unexpected surprise a sure sign we were ahead of the game. 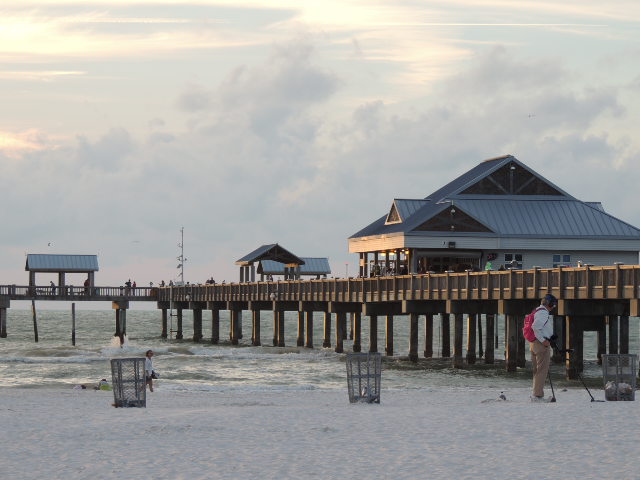 Touching down in Tampa, we were met by another girlfriend Sharon, who had driven down a few days before and gave us a ride to and from the airport. Her generosity saved us the car rental fee of $220 for a 5 day rental from Enterprise, plus gas and we treated her and her mom to a dinner out to thank her for her troubles.

A 45 minute drive west, we arrived at our Travelodge. Situated right across the street from Clearwater Beach, the view from the balconies facing the Beach offered picture perfect sunsets and unobstructed views of the white sandy shore line. Our room overlooked the pool, and for a total of $508 all in for 4 nights accommodation, was well worth the few extra dollars to be located in such an ideal spot. Restaurants, bars, and a ton of tacky tourist surf shops all were within a few minutes walk, as well as the docks that offered dolphin excursions, fishing trips, and parasailing adventures. 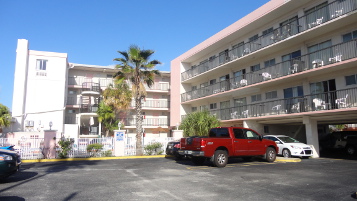 On the Thursday, Kim and I borrowed Sharon’s car and headed back to Tampa to see the Toronto Blue Jays play the New York Yankees. We bought our tickets in advance, and paid $35 each to sit row 8 just up from Third Base. An impressive venue worth visiting, I’m glad we arrived early as parking was already filling up more than an hour before the game. Parking ran us $10 (although the attendant attempted to charge us $20 because we were wearing Blue Jays gear…haha not). On the way to the general parking area, we ended up getting temporarily lost and pulled into the Yankees Club House to ask for directions. A kind security guard showed us where we were suppose to turn, and on our way out we noticed a practice ball laying on the grass. Quick to grab it, we made off with a free souvenir baseball – technically only $10 in the team store, but since it was used by the Yankees, I’d like to reprice it at priceless 🙂

On the way into the Yankees game, the staff were handing out free World Series Replica Rings with the NY Yankees logo on it. Just seconds after receiving my free ring souvenir, a man approached me asking if I’d like to sell my ring for $10. As a Blue Jays fan, I didn’t find much use for the ring. Instead, the $10 I had just made from selling my ring helped to buy the first round of beers for the game – sweet deal! Picking up a $5 hotdog to go with my $7.50 beer, we made our way to our seats and enjoyed watching the Jays beat the Yankees 1-0. 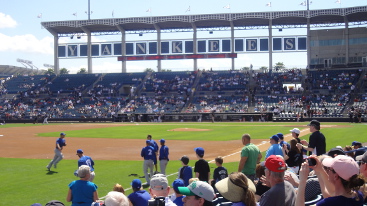 The next day, the Jays were playing in Dunedin, only a 10 minute drive north from our hotel. Again just $10 to park, we made our way into the much smaller but way more intimate Dunedin stadium for our second game of the week. Tickets bought in advance were only $20 each, although speaking to a few people down there, last minute tickets could be purchased through stubhub.com or scalpers outside from a discounted cost if you were willing to chance the availability of good tickets. Beers in Dunedin were only $6.50 each, and although no free items were handed out at the door I could trade to buy my first beer, there was much less of a line up at the smaller stadium. The Blue Jays won again, 5-4 against the Tampa Bay Rays – a local favourite and a sold out crowd. I was lucky at the end of the game to catch Lars Anderson, the newest Jay only acquired a few days earlier, and asked him to sign my Jays baseball cap. Score, and again totally priceless!!! 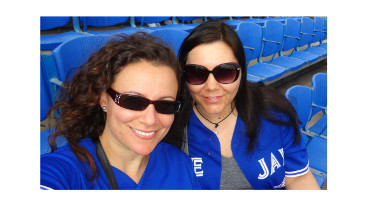 Our final game was again at Dunedin: parking, tickets and beer all the same cost. We went early to see the Jays practice, and waited an hour against the fence of the field in hopes of catching another autograph or two. Our persistence paid off, and Jose Reyes came up to us, and signed my found baseball for me, and signed Kim’s baseball cap. Price wise, a signed baseball goes for at least $50 to $100 in the team shops, but since my husband had to stay at home and work, while I headed south to soak up some sun, I figure it might make a good present for him. Besides, just meeting Reyes was amazing on its own. 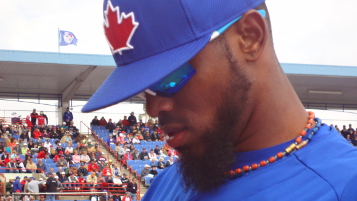 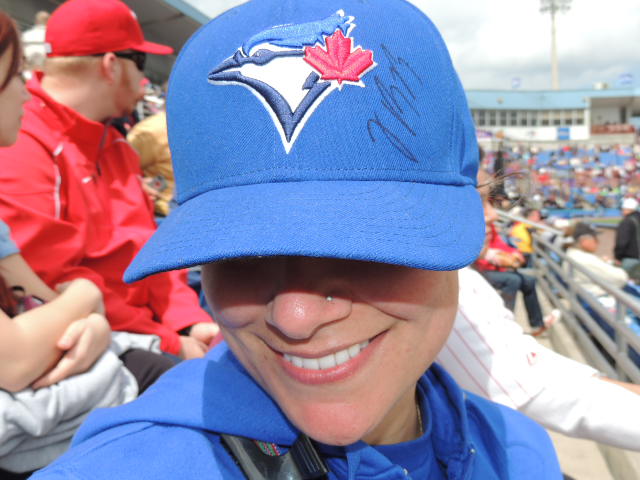 A lot of players take the time to meet up with the fans and autograph a few items during Spring Training as the crowds are a lot less and the atmosphere much more relaxed.

Sorry to leave on the Sunday, after 3 games and a few good walks along the beach, our mini vacation to Spring Training is a trip we plan to take again next year. At the airport on the way back to Toronto, United Airlines asked for volunteers to give up their seats in exchange for a $200 voucher. We both readily volunteered knowing we would be booked on a flight leaving just an hour later, getting us back into Toronto airport a total of 80 minutes past our original arrival time. Unfortunately we weren’t selected, but what a treat it would have been if we had been! Alas, we considered ourselves lucky enough and already are looking at March vacation time for next years adventure south.

– Flights $325 each (including bonus upgrade to 1st class with Delta)

TOTAL: $1000 for 5 days vacation, including a ton of great pictures, meeting a few of the Blue Jays and some souvenirs to remember our trip. Money well spent and a must do for all Baseball Fans!