Truth: I rarely skipped school. As a young child, my favourite game was “school” with my Mom, and I was one of the few kids growing up that looked forward to September more than any other time of the year. Any holidays away were planned around the school year – focusing on March Break and summer time to hop in the car and take a road trip. My younger self would roll her eyes at the thought of missing class, but today I totally recommend ditching class for a few days and taking education on the road.

Truth: I rarely skipped school. As a young child, my favourite game was “school” with my Mom, and I was one of the few kids growing up that looked forward to September more than any other time of the year. Any holidays away were planned around the school year – focusing on March Break and summer time to hop in the car and take a road trip. My younger self would roll her eyes at the thought of missing class, but today I totally recommend ditching class for a few days and taking education on the road.

Thesis: A long weekend on Pelee Island taught my nieces, as well as myself, more than we could have learned in a few days in a classroom. Our curriculum covered French, Science and Technology, History, Careers, Physical Education, Art, Agriculture, and Geography. Life lessons were thrown in as bonus marks.

French. Considering Pelee Island is further west than where we live to the Quebec border, there were 2 french words we learned while on the island. First Pelee…a french word meaning bare, as little of the island was developed until the mid 1800’s.  Even today, the island has a winter population of just 200, although in the summer the population increases to over 1000.  What does cover a lot of the island, brings us to the second french word we learned Vin.  Pelee Island is known for their vineyards, and many people travel to Pelee Island to visit the Pelee Island Winery.  Although my nieces have yet to become fans of vin, they still enjoyed the Winery tour, a surprisingly kid friendly facility, complete with a playground, a BBQ area and many outdoor parties throughout the year for the entire family. 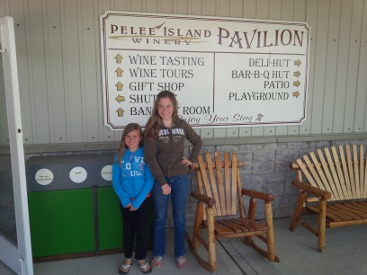 Science and Technology.  By far, my least favourite subject in school has become my top choice for learning in a real life environment.  Pelee Lesson #1: Ontario Lakes are freezing in May.  Considering most of the water in Lake Erie was covered in ice just a few months earlier, it makes sense that a quick dip to cool off is usually much quicker and much cooler than one would hope.  Nevertheless, when it’s hot, there is no more refreshing place to be than in the icy cool waters of a recently thawed lake. 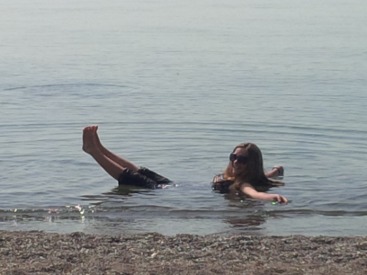 Staying on the lake theme is Pelee Lesson #2: Some beaches have huge waves crashing into the shore, while others, just minutes (sometimes metres) away, are calm and serene.  How can that be?  Depending on the winds and the waters currents, some beaches become more like wave pools and can deafen you from the loud sound the water makes rushing towards the shore.  The island can act as a barrier both in the air with the winds, and in the water with the currents, allowing tranquil beaches more fit for sandcastle building and relaxing. 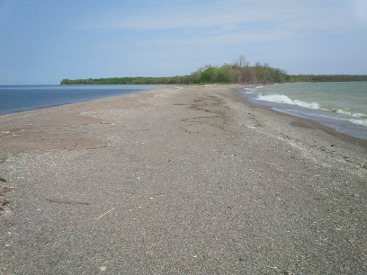 Pelee Lesson #3: There are boats big enough to carry many cars across the water.  I forget sometimes that my nieces haven’t had a chance to explore as much as I have.  My youngest niece Abby who is 9 years old, figured that when I said we were taking a ferry, it would be like the one she’s taken to Toronto’s Centre Island.  She was amazed when she first saw the ferry that was going to take us 90 minutes across the lake to our weekend getaway.  The “nose” of the ferry opened up, and I watched her amazement as car after car filled up the cargo hold of the ferry: a good reminder of how incredible modern technology can be. 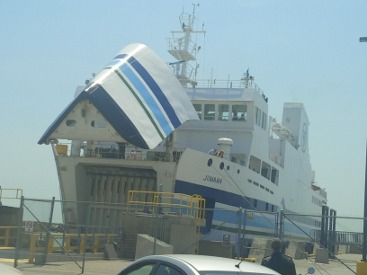 History.  Truly, a neglected topic in today’s school curriculum.  I asked Abby what she was learning about in her Grade 4 history class, and she replied Medieval Times.  Although cool to learn about knights and kings, it’s frustrating that so little is taught about our local history.  Shipwrecks, early settlers hardships, wars between Aboriginals, wars between colonies – there is so much to learn about the incredible past our own town, province and country has.  And the best way to learn about it is to be where that history took place.  Sitting in a classroom watching History videos or reading about the past in a text book is a sure way to turn anyone off this subject.  Towards the end of August, there is going to be a Tall Ships Festival around Pelee Island – an opportunity to see what it was like sailing on these stunning ships.  Check out Pelee Island’s Museum website for further details. 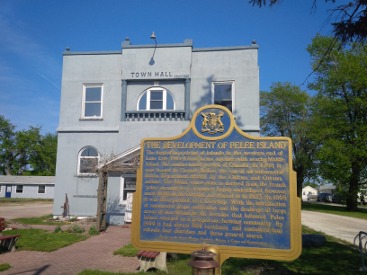 Careers.  More part of the high school subject lists, my oldest niece Taylor has been exploring potential career paths to follow.  She instantly fell in love with Pelee Island and told me after our first day there, she wished she could live somewhere just like Pelee.  I asked her what she would do as a career here…a question she explored throughout our stay.  With such a small population, the opportunity for jobs was limited.  Summer students can work in the Museum, or at the Winery providing tours to the guests.  Work is primarily seasonal, as the tourist season runs from May through to October.  Restaurants, Motels, Bed and Breakfasts’ and Tour Companies are in full swing during those months, but as the season winds down, many people are without work.  One of our waitresses told us that she works on the weekends at the restaurant, but during the week as a teacher at the Public School on the Island.  Pelee Island is very much a paradise to visit – but living and working there year round is a difficult life, and population numbers are slowly decreasing.