It started out to be a week long roadtrip, with no real destination in mind except a stop to check out Quebec City.  Then a random search on Google, a few pints later, we had mapped out more of a must visit Brewpub tour of the province of Quebec, rather than a typical tourist attraction agenda.  So began my quest for my favourite Quebec brewery – not quite the cheap, healthy roadtrip I had originally believed possible, but a unique adventure to say the least.  My findings, not scientific at all, are based on my own personal preference on what makes a Brewpub worth a visit.

It started out to be a week long roadtrip, with no real destination in mind except a stop to check out Quebec City.  Then a random search on Google, a few pints later, we had mapped out more of a must visit Brewpub tour of the province of Quebec, rather than a typical tourist attraction agenda.  So began my quest for my favourite Quebec brewery – not quite the cheap, healthy roadtrip I had originally believed possible, but a unique adventure to say the least.  My findings, not scientific at all, are based on my own personal preference on what makes a Brewpub worth a visit.

Centrally located, just a few minutes walk from the VIA Train Station, La Barberie is a very non assuming pub located at 310 rue St-Roch.  So non assuming that we had to drive past it a few times before we found a sign stating that we were in the right place.  Although no flashy billboards, and limited advertising – the pub is nevertheless “known” by the neighbourhood locals, and those with any interested in Micro Breweries. (When we asked the hotel receptionist where a good place to eat would be close to rue St-Roch, as we’d be going to a pub close by afterwards, she immediately asked it if it was La Barberie…and gave us the nod of approval once we said it was…who doesn’t love getting the nod from a local about your pub selection 🙂 ). The tables and chairs don’t match, there is a few bench seats here and there, the bar itself if small and dimly lit.  But instantly I felt comfortable.  The staff were unpretentious, spoke both French and English (despite their website being solely in French),  and were knowledgable about their selection of beers. 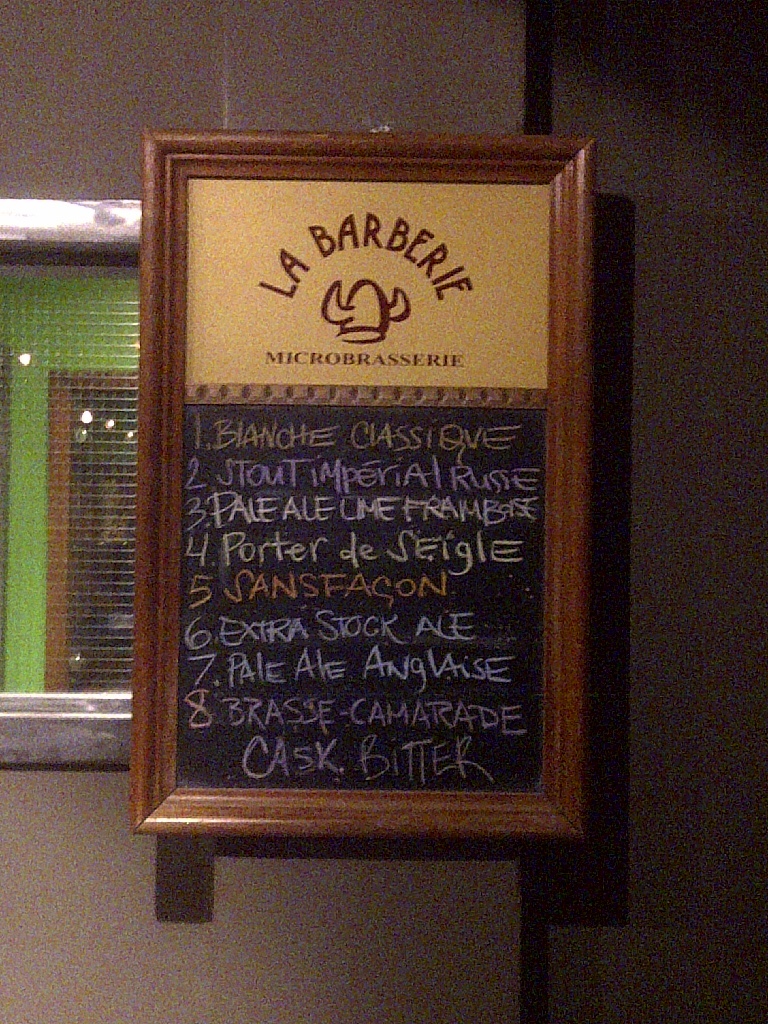 I choose a sampler tray, that featured a 5oz sample glass of all 8 beers they had available on tap.  A steal for only $17, I worked my way from the lightest beer to the beautifully robust porters and stouts. 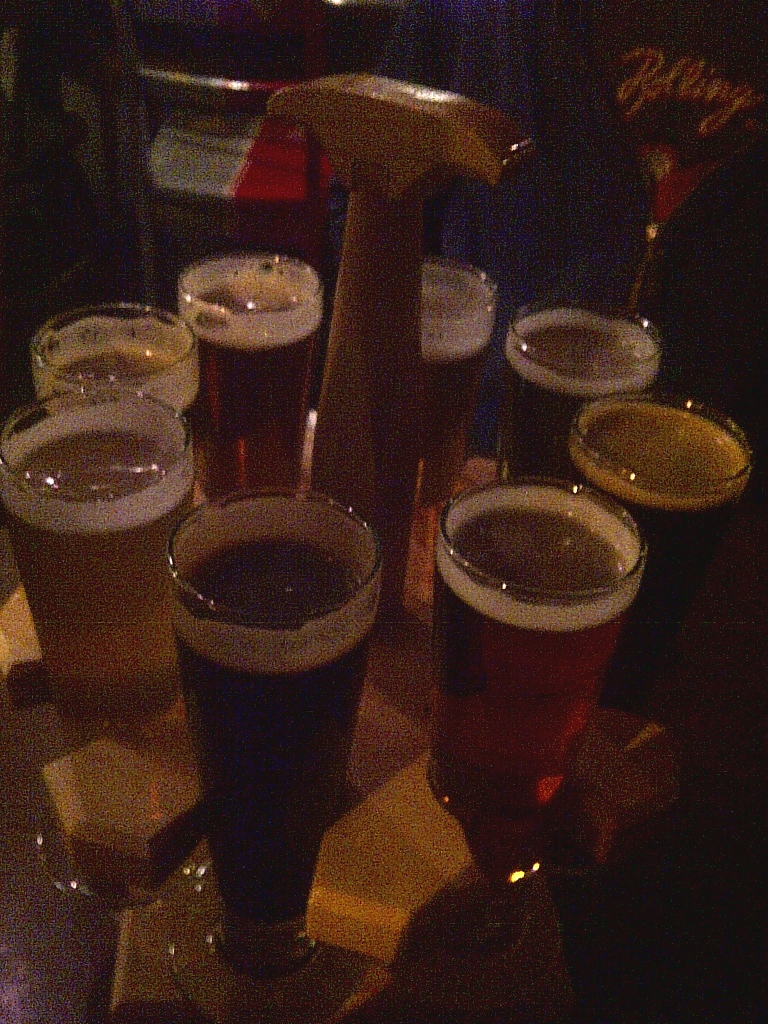 My only complaint, and really it’s not much of one as I found this trait to be common in Quebec pubs, is that there was no kitchen available for food (although guests are allowed to bring in their own take out food).  Spoiled with delicious food to usually accompany my beer selections in many of the Micro Breweries in Toronto, I would have preferred more options in the menu department.  Alas, the frequent patron’s of the Quebec pubs are usually there for one purpose, to enjoy their heavenly pints.  I can’t blame them.  La Barberie beers are also available at select restaurants and bars throughout Quebec.

On one of the major shopping streets, a quick walk from the Old Wall in Quebec City, L’Inox blends in with most of its restaurant and pub neighbours.  If I hadn’t read about L’Inox before our roadtrip, I’m not certain I would have made the effort to go.  New, modern, spacious setting – this pub looked like an overpriced tourist stop comparable to the 3 Brasseurs restaurant chain that sits across the street. 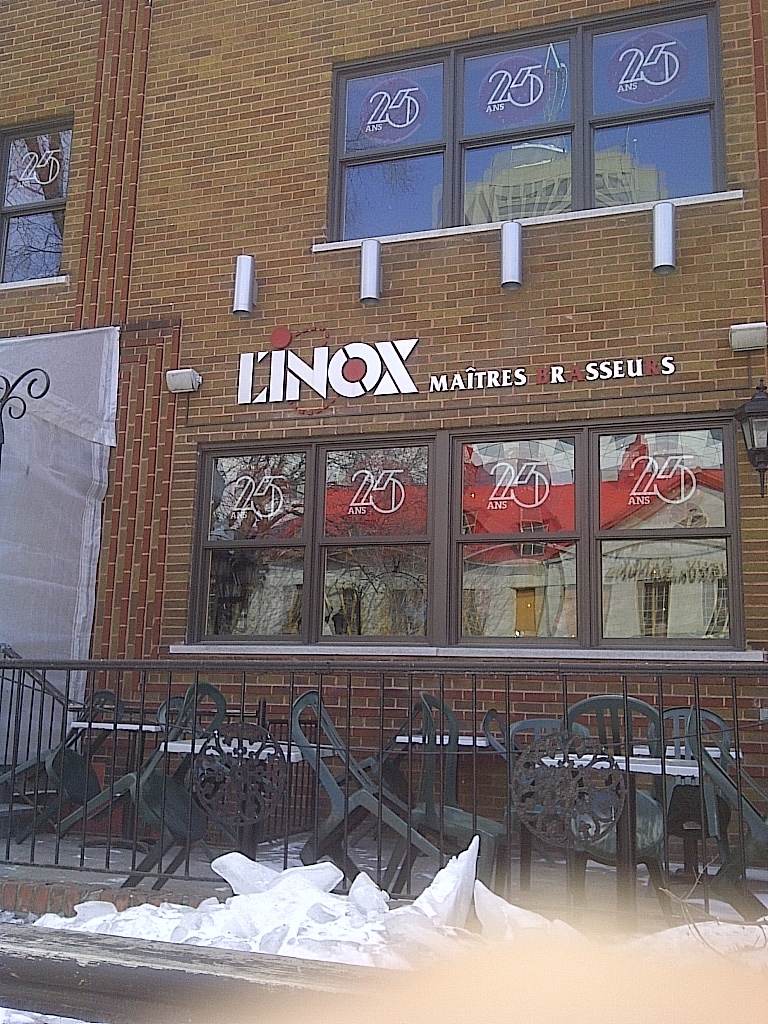 Inside though is a different experience.  As expected, a limited menu featuring hotdogs and pizza, the beer menu of their own brews was small, and to the point.  I chose the sampler again – a great deal for just a $1 a glass, I enjoyed the seasonal brews the most – the Viking selection, flavoured with honey, and accented with a cranberry. 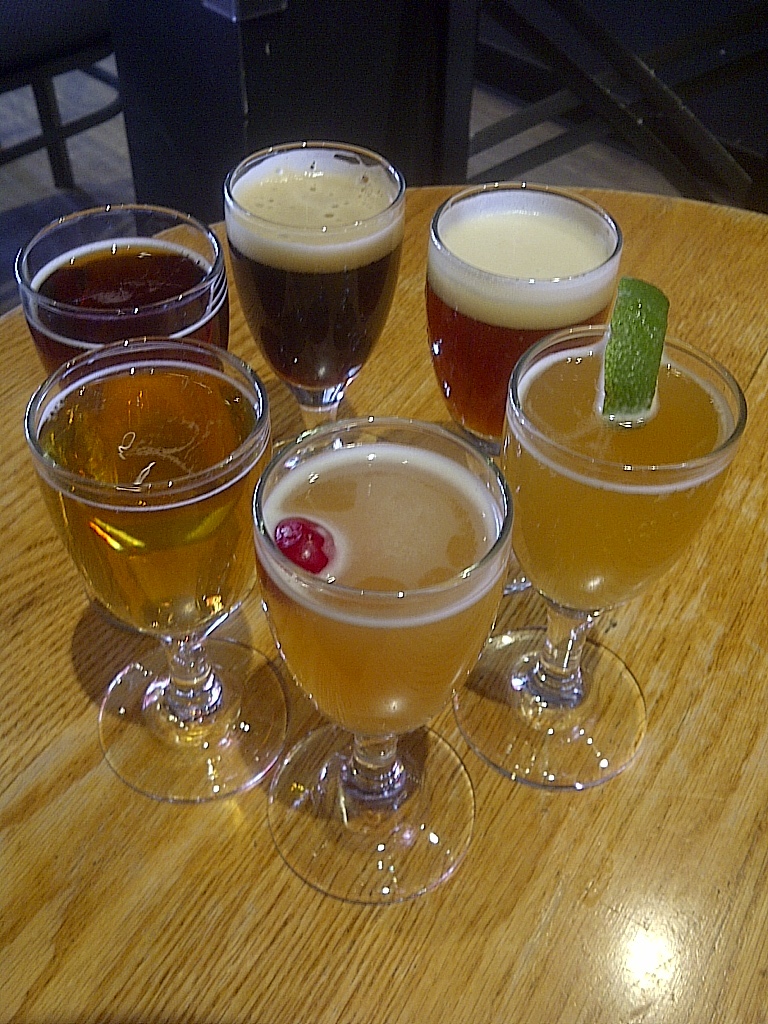 I’d recommend L’Inox as a perfect starter, for those interested in learning more about microbreweries, types of beer, discover why craft beers are popping up everywhere, and why this is an amazing and tasty trend.

My first impression from the website alone, is that I wasn’t going to like Brutopia.  3 floors of bars does not intrique me as it once did when I was in my early 20’s.  With bar shirts available for sale, I feared Brutopia was going to be more like a downtown club with overpriced greasy food, and bland tasteless beer. 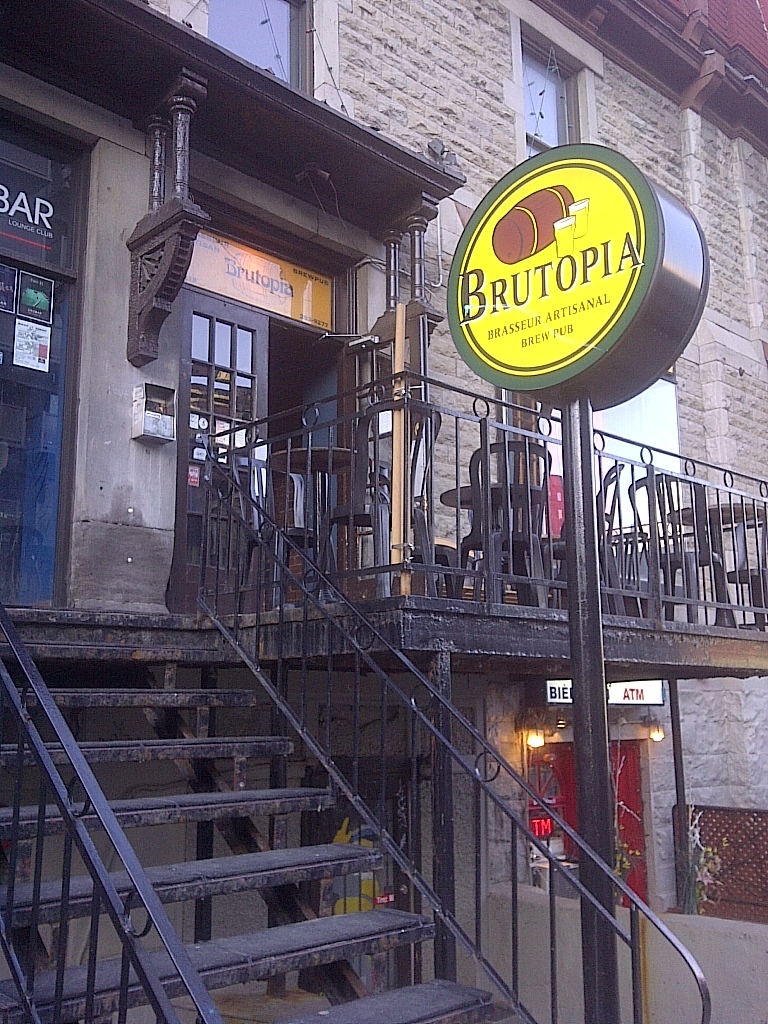 I am so happy I was wrong.  We didn’t make it to see all 3 floors of bars, but sat on the main floor surrounded by warm brick walls, beautiful local artwork, and instantly felt welcomed and relaxed.  As a nice change, their were lots of international food choices on the menu, and a great selection of beers to chose from.  I love winter beers, and travelling at the end of the winter season, most of the winter selection is readily available. 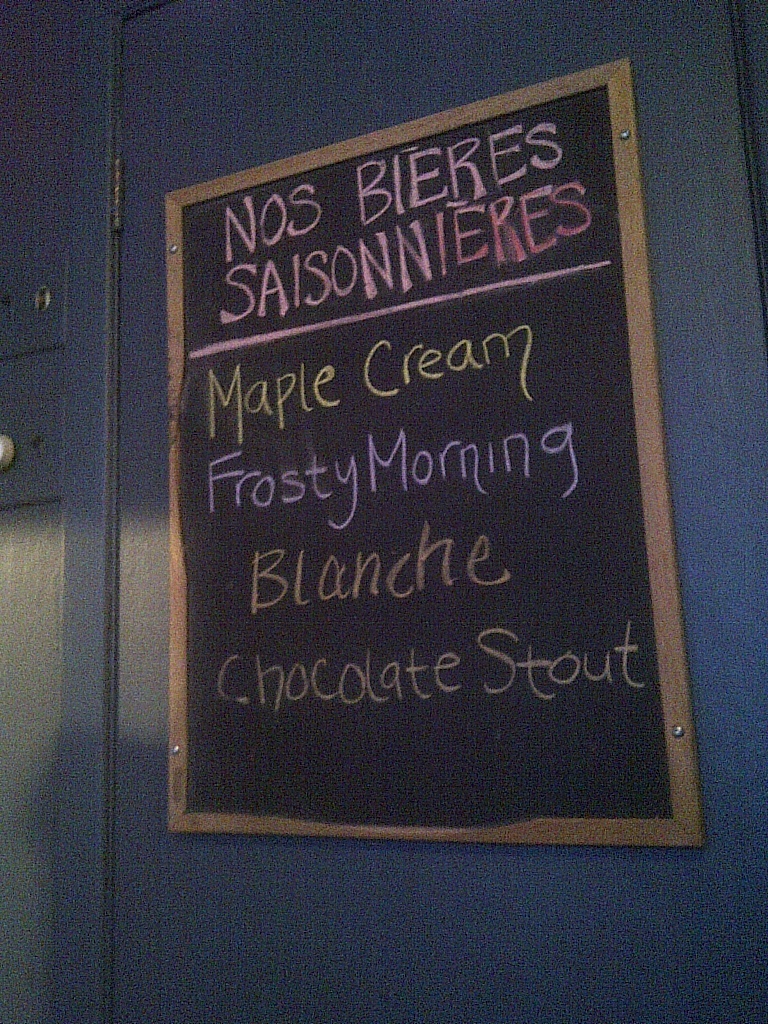 Working my way down the menu, I started with half pints of each choice.  Each delicious and highly recommended, I had to go back to Frosty Morning and have a full pint, even after my Chocolate Stout.  Easily one of the best beers I have ever sampled, Frosty Morning is a red beer, smooth and light, with a clean finish – this beer caught me off guard as usually my favourites include dark beers such as stouts and porters.  Wishing I had more time to sample their other beers, Brutopia is a place I look forward returning to when back in Montreal.

Korrigane ended up being our first stop in Quebec City.  It was a quick 5 minute walk from our hotel, and since the weather had dipped down to an unseasonal -15 degrees Celcius, we wanted somewhere close by to warm up.  Arriving on a Tuesday night, the pub was already starting to fill up and we grabbed a table for 2 towards the back of the room.  The beer menu was simple, and displayed on a few chalkboards around the room. 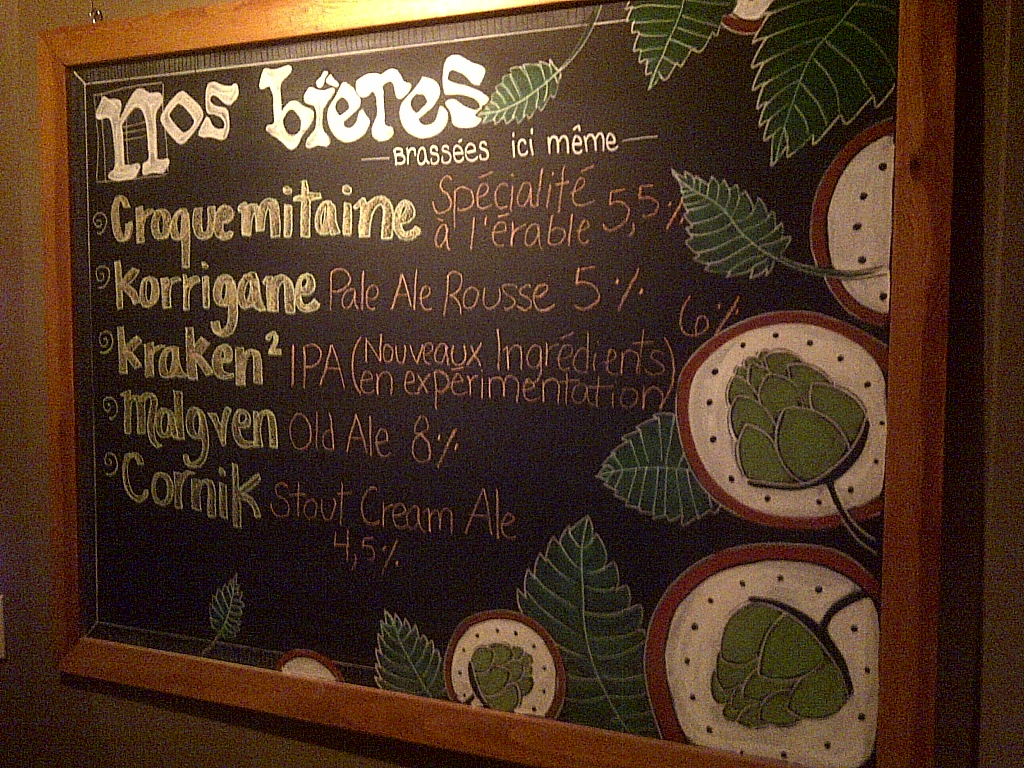 The variety was good, and we sampled a little of everything.  The food menu on their website looks decent – again all in french, but I roughly translated before we left on our adventure.  As timing would have it, the kitchen wasn’t open (perhaps renos, I’m not certain), and the menu consisted of 3 choices of Grilled Cheese Sandwiches.  Thankfully, I love grilled cheese, and choosing what I’d have for dinner ended up being a much more minor decision than I first thought it would be. 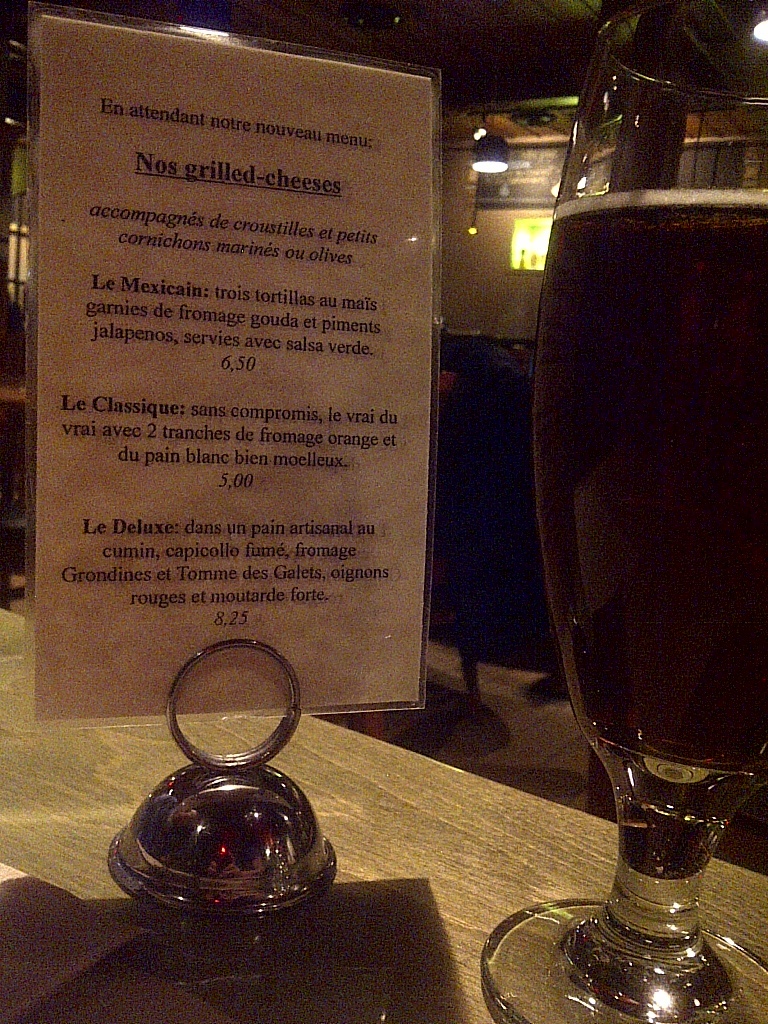 Korrigane’s easily made my #2 spot on Favourite Brewpubs of Quebec list, as the beer was tasty, staff friendly, it had a warm atmosphere and despite their limited menu, an excellent dinner/night out for such a cold winter’s day.

Easily one of my favourite places on earth – Dieu du Ciel, has been the highlight, and the inspiration for one or two of my roadtrips in the past few years.  Tucked away on a sidestreet a 20 minute walk away from the touristy Old Montreal, Dieu du Ciel brew pub always seems to have a steady stream of patrons enjoying a few pints after work and into the night. 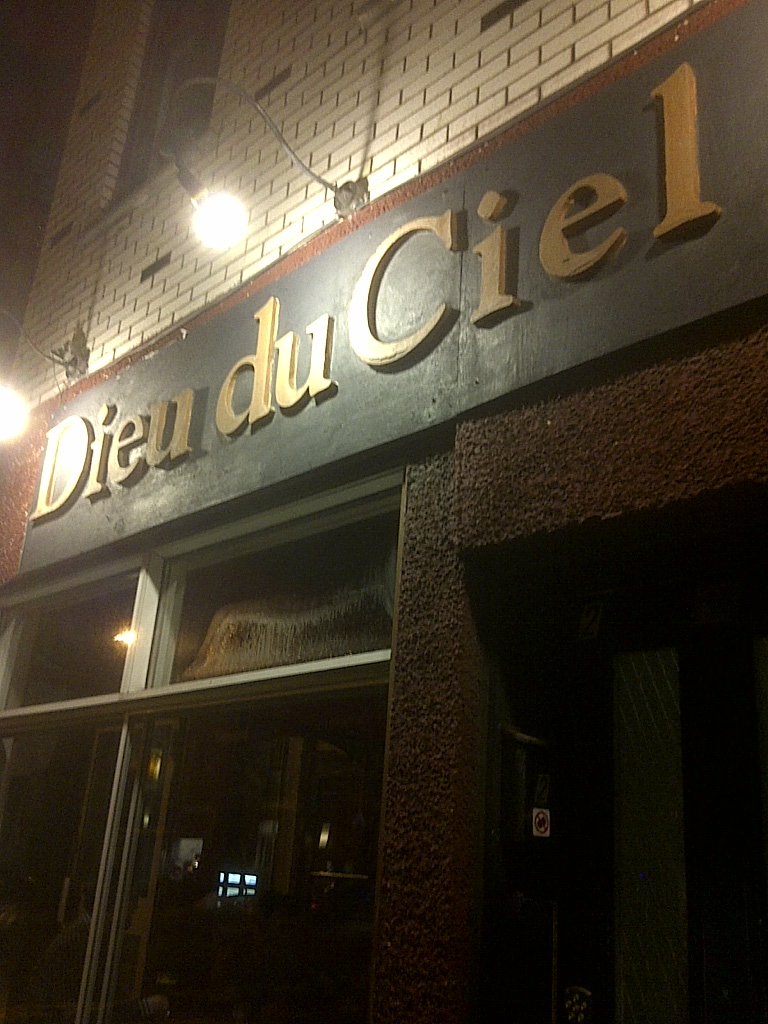 Usually about 15 beers or so on tap, this microbrewery has some of the most exquisite beers I’ve ever tasted, including Aphrodisiaque – a cocoa and vanilla stout that is blissfully available in some local pubs in Toronto. In Ontario, they have had to change the name to Aphrodite – long story, but same delicious beer.  The brewmasters at Dieu du Ciel are always challenging the standards for beer, and with very few exceptions, I consistently am pleased when I sample their new creations.  Their “on tap” menu changes regularly, so frequenting the pub on consecutive nights leaves a new experience each time. 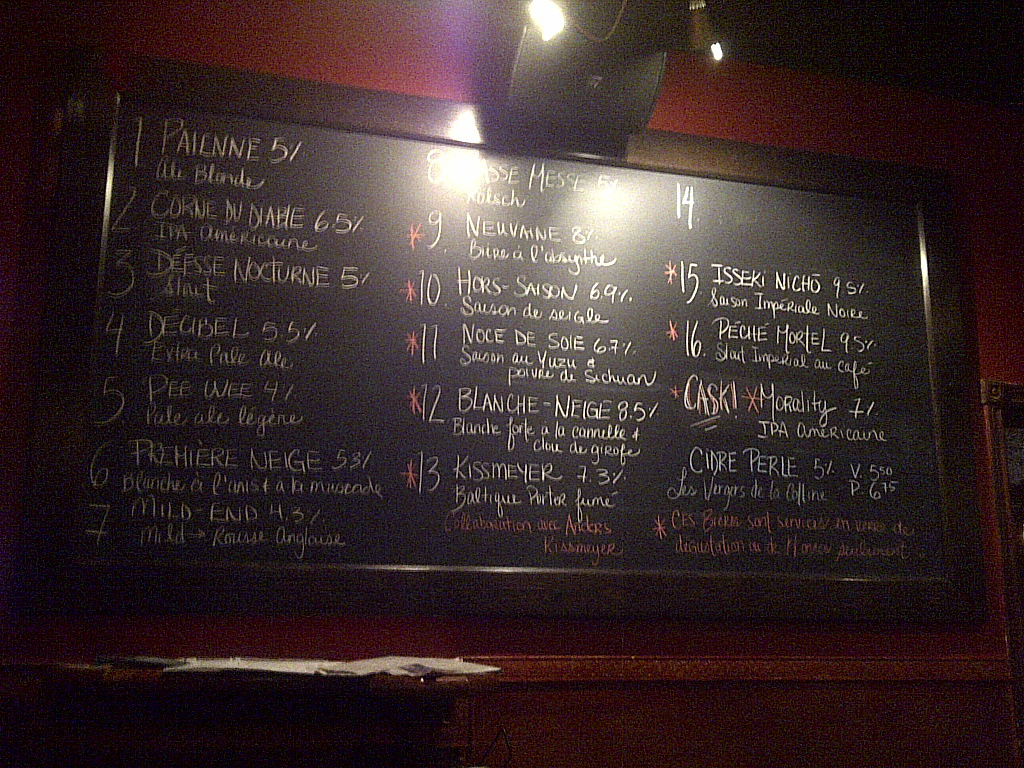 As a bonus, Dieu du Ciel’s food menu included a savory cheese platter (Quebec cheese is legendary throughout the world, and a perfect compliment to any beer night out, nachos, and an assortment of other pub fare to satisfy anyone’s hunger.

Quebec’s long frosty winters are legendary, and maybe that’s the reason that they excel at producing many choice warming beers.  Although that doesn’t help to explain why I plan on returning to La Belle Province this summer, to sip some of their enjoyable cooling beers on a patio once the temperature starts rising.

I’m always looking for suggestions of places to try, and recommendations for a place to enjoy a few pints.  Please offer up any secret/not so secret places you love to visit, in Quebec or anywhere in the world!  Cheers!

**Footnote: Never drink and drive.  At the entrance of most pubs I visited, I found this: 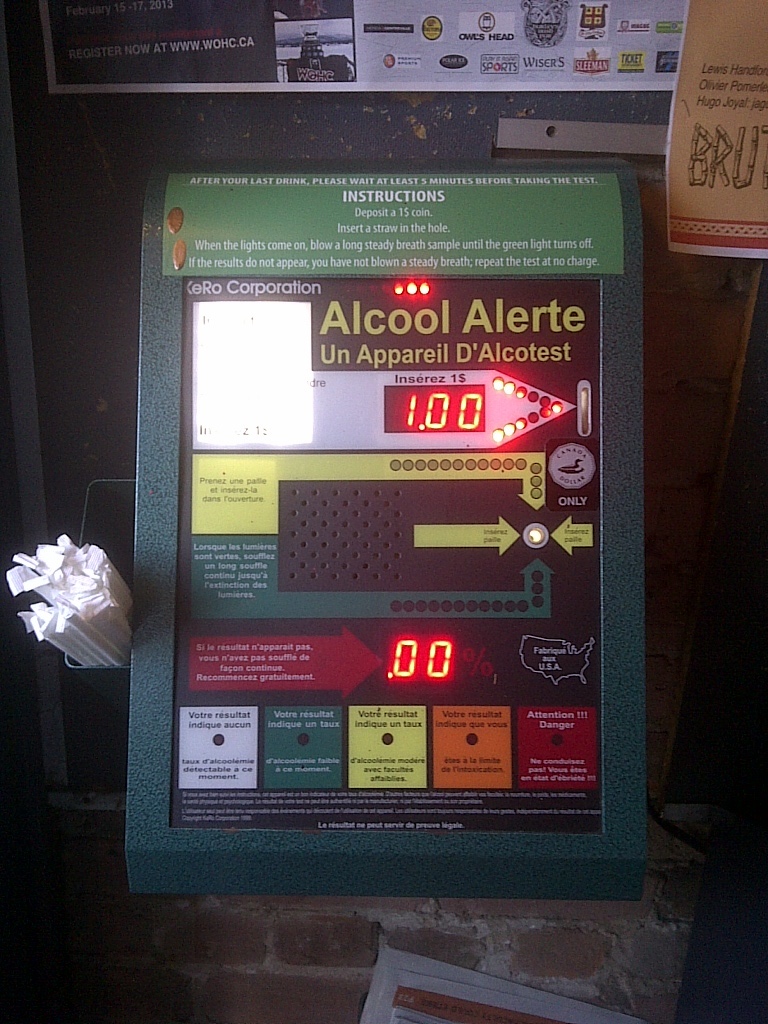 If you need to check, grab a taxi any way.  I never like my work to follow me on vacation.