Despite it being one of the first “attractions” we visited in Cambodia, this was an article I truthfully put off writing the longest.  When I remember Cambodia, I want to remember the beaches, the people, the food, the beautiful countryside…not the horror of the Khmer Rouge reign in the mid to late 1970’s.  But Cambodia’s history has shaped the country and its people in such powerful way, to ignore the past is a disservice to the inspirational people that survived Pol Pot’s mass genocide.

Despite it being one of the first “attractions” we visited in Cambodia, this was an article I truthfully put off writing the longest.  When I remember Cambodia, I want to remember the beaches, the people, the food, the beautiful countryside…not the horror of the Khmer Rouge reign in the mid to late 1970’s.  But Cambodia’s history has shaped the country and its people in such powerful way, to ignore the past is a disservice to the inspirational people that survived Pol Pot’s mass genocide.

My first visit to Phnom Penh, Cambodia’s capital city, was 7 years ago on an Intrepid group tour.  Back at the time, I hardly knew anything of Cambodia’s history – it not having been taught in school or mentioned in the popular media to my knowledge, with the exception of a Hollywood Film, the Killing Fields made in the early 1980’s.  Despite the millions killed over a few short years, a horrific war crime that happened in my lifetime, my first exposure to who the Khmer Rouge were was my first visit to Tuol Sleng, also known as S21. 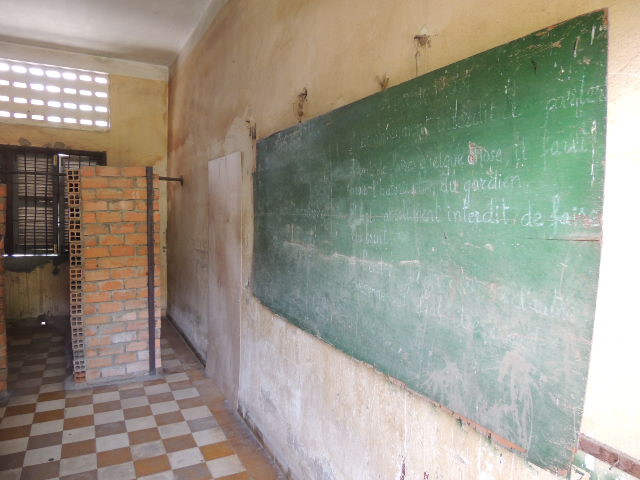 A brief histoy of the Khmer Rouge: On April 17,1975, the Khmer Rouge overthrew the Cambodian government in Phnom Penh, and attempted to create a rurally based communist state.  Thousands were evacuated out of the urban areas, many being told that the United States had planned to bomb the cities and leaving was the only way to stay safe.  With the Vietnam War so recent, and bombing from US forces already having occurred in other areas of Cambodia, many followed the orders of the Khmer Rouge and relocated to rural compounds.  Forced to work in rice fields over 12 hours a day with minimal food, denied medical treatment and contact with other family members, many died from starvation and disease.  Those who opposed the Khmer Rouge rule were considered traitors and sent to prisons like Tuol Sleng.  These prisons were used as torture, interrogation and execution centres between 1976 and 1979.  Mass gravesites like Choeng Ek, also known as the Killing Fields, today tell the story of unimaginable horror of the millions that lost their lives under Pol Pot’s leadership.  Little of this genocide was known at the time due to the country being closed to most outsiders.  What is the most saddening is that the Khmer Rouge held a seat at the United Nations until 1993, thanks to the support of many Western Governments.  Only in 1997 was Pol Pot placed under house arrest after being accused of killing another leader in the Khmer Rouge.  In 1998, he died of heart failure – never once held accountable for the mass genocide he had ruled over.  More information on the Khmer Rouge can be found on the Cambodia Tribunal website.

Set amongst Phnom Penh’s neighbourhood apartments, restaurants and stores sits the unassuming Tuol Sleng.  The light coloured walls surrounding the former high school blend in with the city surroundings.  Even inside the compound, we couldn’t easily comprehend the significance of this prison until we started reading the literature on the individual rooms, and hearing the stories from the guide we hired for $2 US each to escort us around the complex.

Our somber tour began at the main courtyard where 11 graves remain, remembering the final executions that took place in Tuol Sleng the day the Vietnamese invaded Phnom Penh and drove out the Khmer Rouge in 1979. 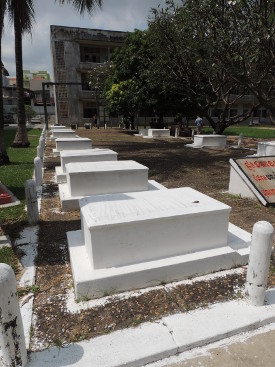 Next we visited the interogation rooms set aside for prisoners thought to be spies.  In the rooms are simple bed frames with shackles and chains resting on the beds as well as old ammunition cases used as toilets.  A few pictures are on the walls, showing the bodies that were found left there once the prison was abandoned by the Khmer Rouge guards.  Our guide left nothing to the imagination, describing in detail the acts committed here in order to extract information from those in captivity.  Haunting more so, are the stains from the blood of the prisoners that still remain on the floors, walls and ceilings of some of the rooms.  A reminder that this site isn’t a recreation of a dark piece of Cambodian history – this is exactly where thousands suffered. 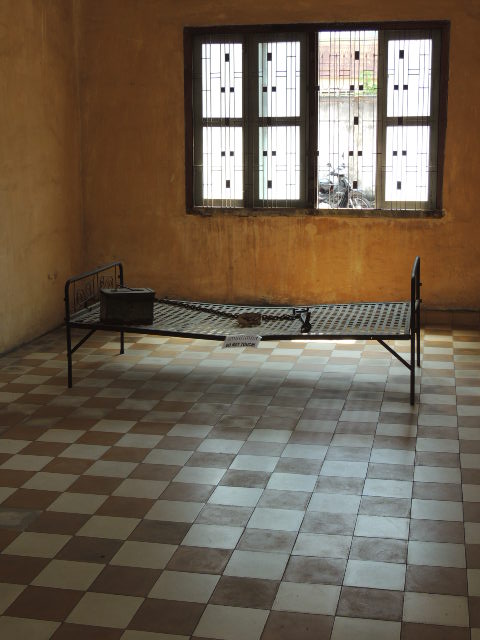 One of the interogation rooms in Tuol Sleng  Phnom Penh, Cambodia

Similar to the Nazi’s who documented their killings with absurb detail, the Khmer Rouge also documented the prisoners who came to be at Tuol Sleng.  Photographs of the men, women and children who were considered traitors to their cause are on display.  These photographs of those that were eventually killed left me wondering if they already knew their gruesome fate, their terrified eyes starring back at me. 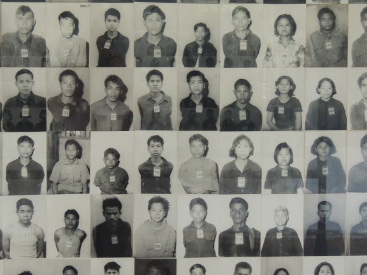 Some of the 17,000 prisoners all held at Tuol Sleng  Phnom Penh, Cambodia

I didn’t have to go far to see where most of these prisoners lost their lives.  17km south of Phnom Penh, a ghastly discovery was made after the fall of the Khmer Rouge regime.  Choeng Ek, also known as The Killing Fields, is now a memorial marked with a large Buddhist Stupa filled with thousands of human skulls exhumed from the surrounding fields. 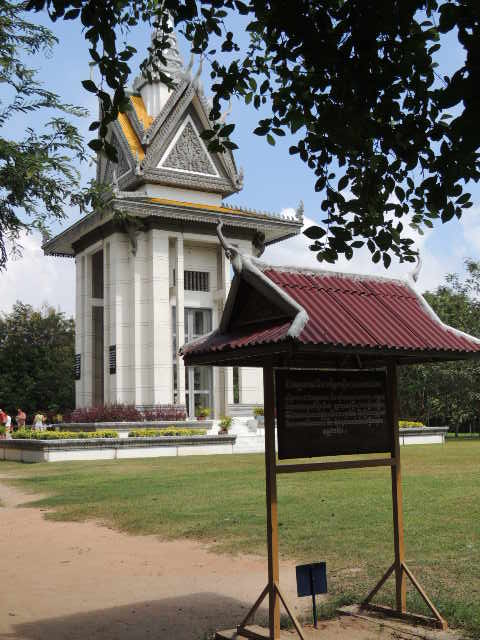 For $5 US admission, an audio tour is included available in many languages.  The audio guided tour takes you around the Stupa to mass gravesites where bones are still today being exhumed.  During the rainy season, many bone fragments and articles of clothing resurface on the walking paths and are collected and stored by the employees of Choeng Ek.  Many of the mass graves are fenced off, and signs are posted telling of what was found in each area. 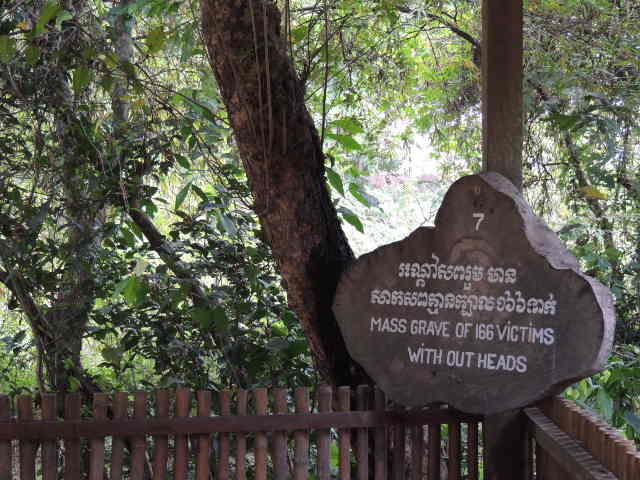 As a personal tribute to those lives lost, visitors to Choeng Ek have begun to leave their colourful bracelets along the fences surrounding the gravesites.  The children’s gravesites were the most decorated, with hundreds of bracelets found all around the fence posts. 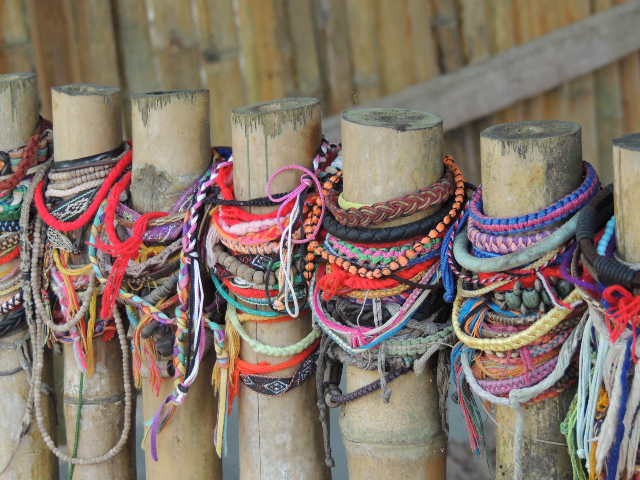 The audio tour offers the option of listening  to some of the personal accounts of those who were forced to work in the Killing Fields, as well as those who had somehow managed to survive.  For those who have taken this tour, you will know I have left a lot of details of the killings out.  Too morbid for me to comfortably describe, I have chosen to exclude some of what I had learned during my visit at both Tuol Sleng and Choeng Ek.  Despite the monsterous lessons in history, these two memorials should not be left out of any visit to Phnom Penh.

Towards the end of our audio tour of Choeng Ek, the narrator of the tour left us with a sobering thought.  Genocides happen everywhere, all over the world.  No place is exempt from the potential for this threat.  Educating ourselves, and remembering the value of human life is essential in order to help prevent future senseless loss.