As part of my attempt to become a better tourist in my hometown, I signed up for the Urban Adventure, Beer Makes History Better. Truth be told, they had me at beer. A history lesson as well sounded like a valuable bonus, so at 3pm on a Friday afternoon, we met our tour guide Jason in front of the Hockey Hall of Fame.

As part of my attempt to become a better tourist in my hometown, I signed up for the Urban Adventure, Beer Makes History Better. Truth be told, they had me at beer. A history lesson as well sounded like a valuable bonus, so at 3pm on a Friday afternoon, we met our tour guide Jason in front of the Hockey Hall of Fame.

Jason informed us that it would just be the three of us on the tour, a surprisingly slow afternoon for him, but since he was hosting a Ghost Tour later on that evening for 130 guests, a small group seemed ideal. After introductions, Jason started right in with an explanation as to why the tour began at the Hockey Hall of Fame. Although the association of beer and hockey seemed obvious to someone born and raised on “It’s Molson’s Hockey Night in Canada” Saturday night television broadcasts, I’ve learned that hockey had more to do with beer history than I thought. In recent history, during the Vancouver 2010 Olympics, American President Obama and Canadian Prime Minister Harper wagered a case of beer on the outcome of the gold medal hockey game between their respective countries. Harper ended up donating the case he won, as well as the second case of beer Obama threw in for good measure to the Hockey Hall of Fame. 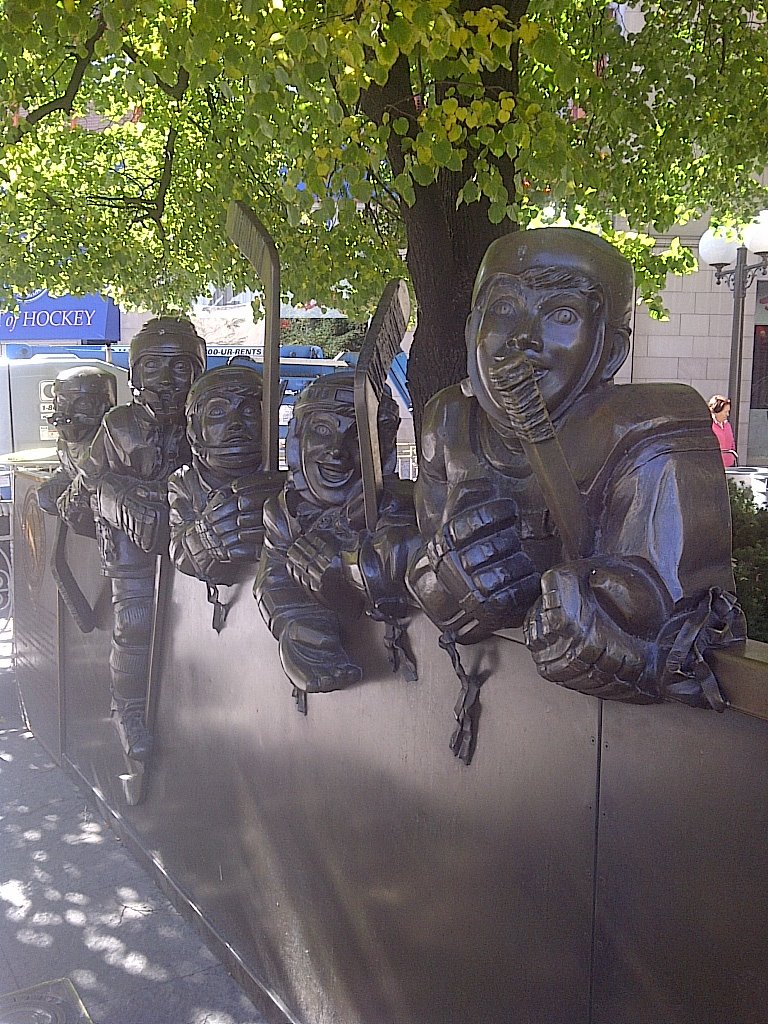 From there we walked a few blocks west along Front Street to C’est What? brew pub, located in the basement of a row of stores along the south side of the street. Despite being underground, the pub doesn’t feel claustrophobic. It instead creates a warm and cozy atmosphere, complete with a fireplace, a large open bar and dining area, and an excellent selection of micro brew beers.

I had a sampler pack, all seasonal brews including the Highballer Pumpkin on cask from Grand River, Cambridge, the St Ambroise Pumpkin Ale from McAuslan Brewery in Montreal and the Oaktoberfest, from Black Oak Brewery in Toronto. The staff at C’est What? know their stuff, and can recommend barley beverages based on time of year, preferences and food pairings. During our beer tasting, Jason talked about the origin of beer, why beer is primarily a cold climate beverage, and why bringing over $360 worth of beer from Quebec into Ontario is actually breaking a federal law, even if it’s for personal consumption (who knew?). C’est What? is a must visit pub for any beer loving tourist. 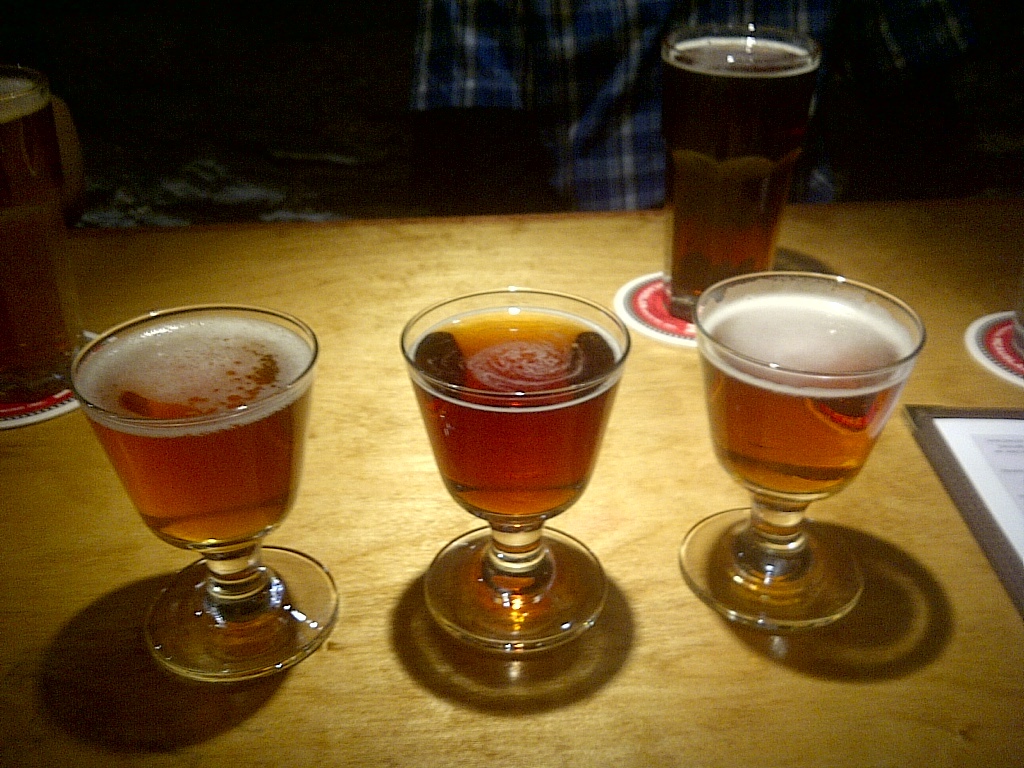 Outside again in the sunshine, Jason pointed out the flatiron building located just west of C’est What? He said a lot of tourists up from New York ask if that’s Toronto’s smaller version of their flat iron building. In fact, Toronto’s flat iron building was built 10 years earlier than the famous New York building and has significant ties to Toronto’s beer industry. One of the first brewers in Toronto, George Gooderham (of Gooderham and Worts) wanted a headquarters for his many businesses, including his whisky distillery located near the lake shore. He also built a bank beside the flat iron building, with a tunnel to transfer the money back and forth without being seen. Sadly, the original bank was demolished, and a newer, much uglier building was built – progress in its worse form. That new building now sits abandoned and remains an eyesore, especially beside the beautiful flat iron building. From Gooderham’s office on the top floor directly under the steeple, he could watch his ships go out of the harbour filled with his whiskey, and return filled with money from its sale. 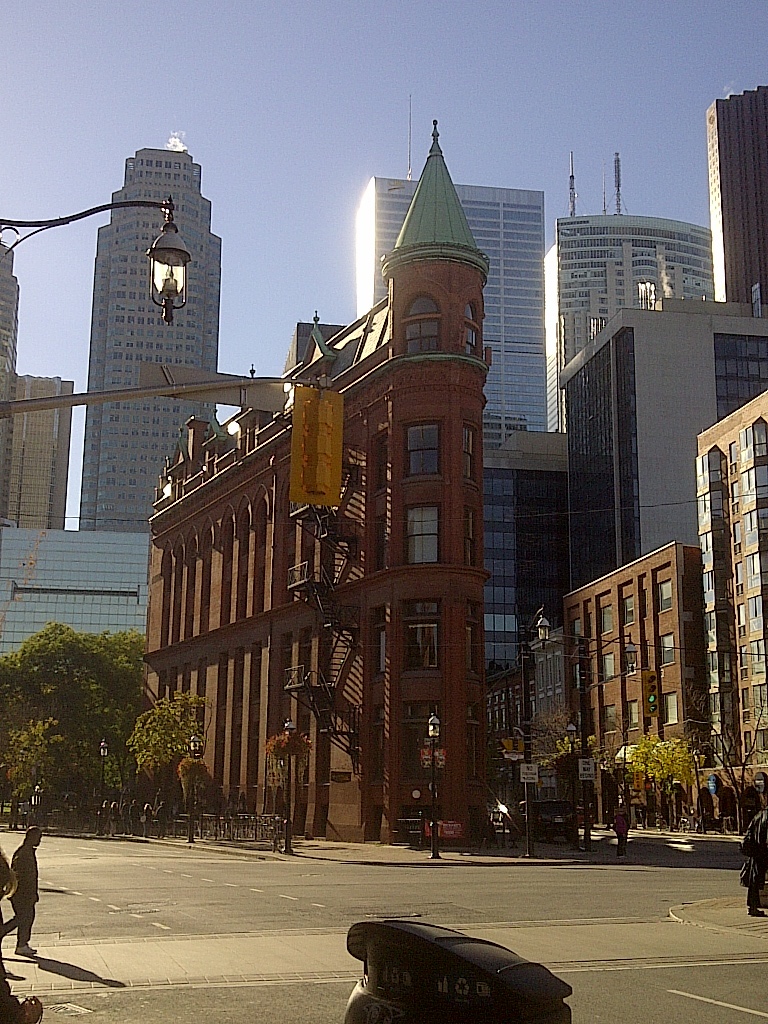 Our next stop was the St. Lawrence Market. ***trivia alert*** St. Lawrence, as I found out on the tour, was the patron saint of Canada. One day, that question is going to come up on a quiz show, or trivia game and you will now have the answer. You are welcome. 🙂 The St. Lawrence Market recently won National Geographic’s best market in the world, and there is no mistaking the pride. There are many banners up around the market declaring it so. In the market, there is a vast assortment of butchers, fruit stands and shops. Jason wasn’t just a wealth of information about beer and history…he knew his Canadiana food as well. Why, you might wonder, does peameal (a.k.a Canadian bacon) have a yellow coating on it? Well…Canadian pork has always been well known as being of superior quality, but when it was shipped overseas, it was tough on appearance alone to identify Canadian pork. So, in order to have Canadian pork easily recognizable, the pork was rolled in crushed up dried yellow peas. Today, it is rolled in cornmeal, but the peameal name stuck and today, Canadian bacon can be easily identified in all parts of the world. St Lawrence Market makes an awesome peameal bacon sandwich, so if you find yourself there around lunch, get in the line…it’s worth the wait. 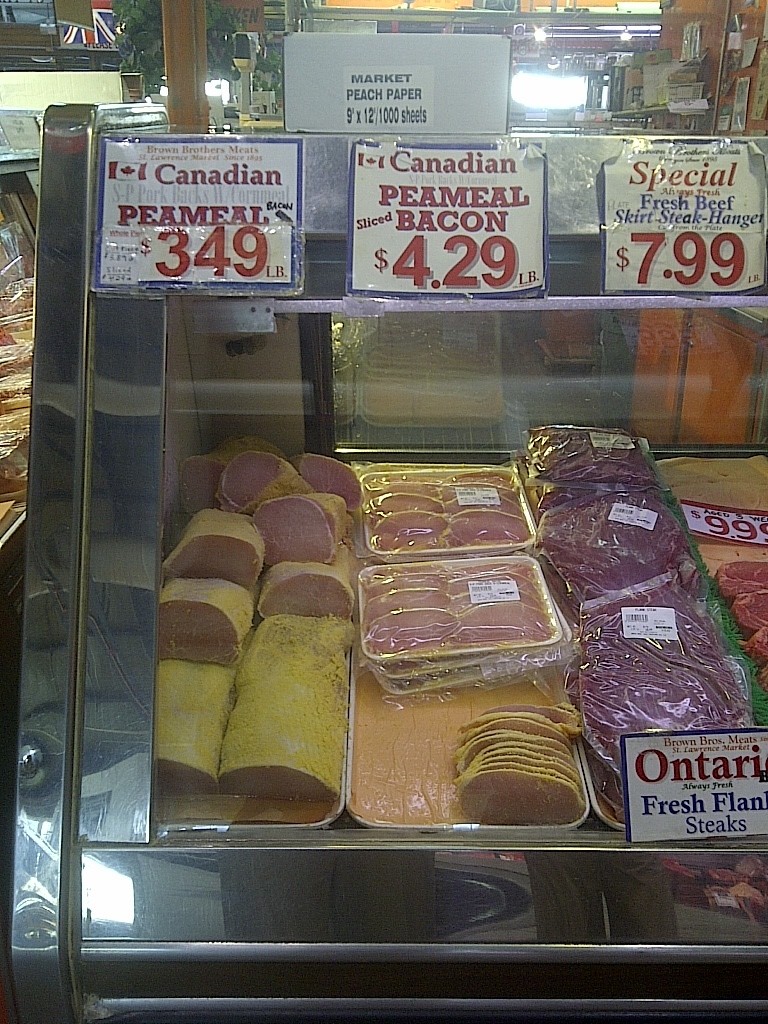 Travelling a little north, we walked up Market Street, where farmers used to bring their goods to sell, up to King Street. Along the way, Jason stopped to talk to us about the unique art projects and significant yet previously unnoticed historical displays. Our next stop was Betty’s – a bar I’m embarrassed I hadn’t heard of before, because I can easily see it turning into my new favourite. Betty’s is a bohemian style pub, with a selection of micro brews that would impress any avid beer enthusiast. My favourite beer by far was the Stiegl Radler – a mix of half Stiegl Goldbrau and half high quality soda with all natural flavours – in this case, grapefruit. Low in calories and low in alcohol content (2.5%), it may be my new perfect summer beverage. Back on the road after a few sample glasses under my belt, we headed east towards one of Toronto’s best neighbourhoods – The Distillery District. 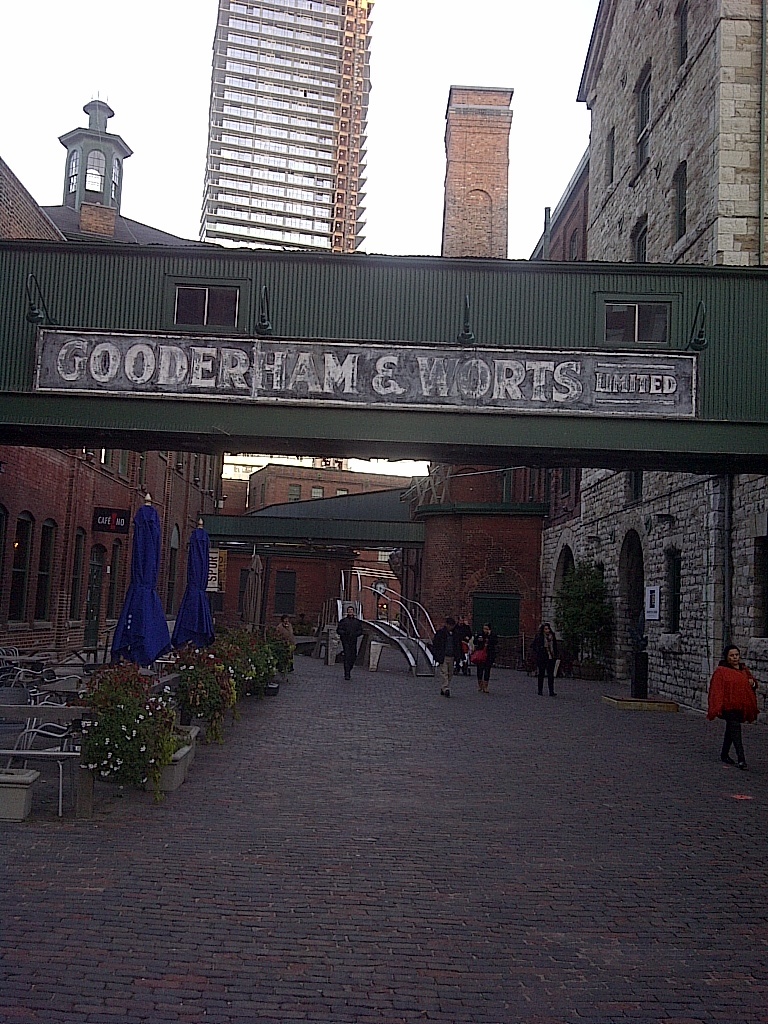 With old cobblestone streets meant for pedestrian traffic only, this block of the city has the original buildings used by Gooderham and Worts for their whiskey/beer businesses. Filled with upscale restaurants, chocolate shops, stylish condominiums, and unique art sculptures, this neighbourhood is great place to live, eat and wander aimlessly. It was here where we finished our tour at the Mill Street Brewpub, enjoying a few free samples of their top sellers. 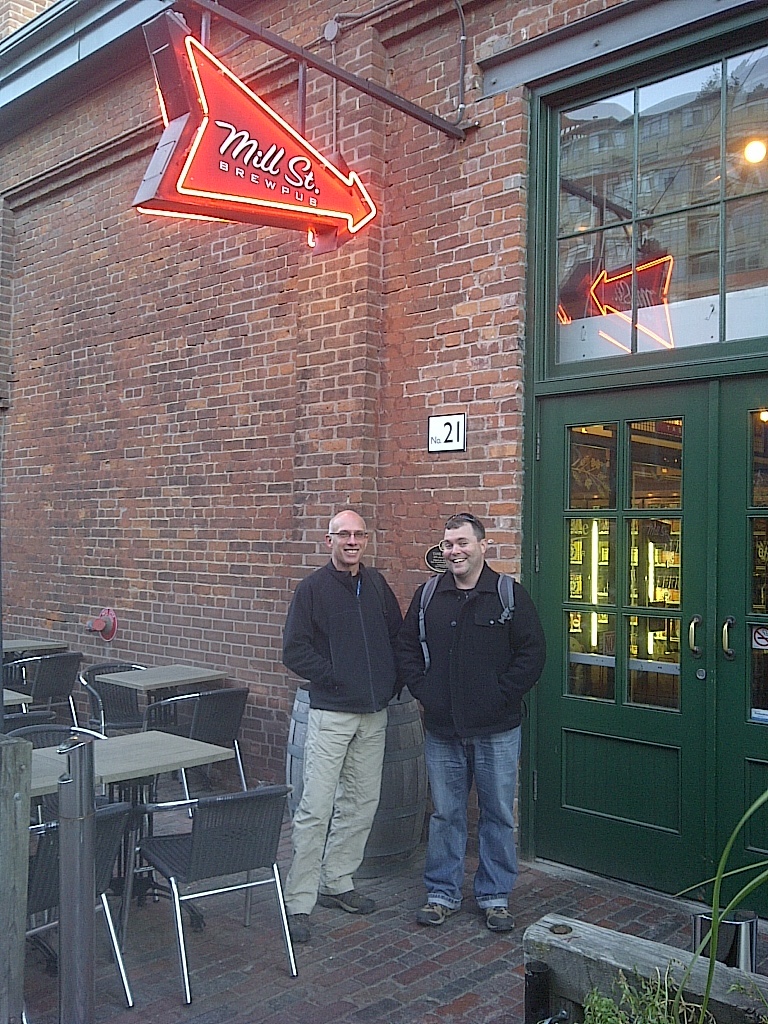 There is no doubt why Urban Adventure tours are #1 on Trip Advisor on best things to do while in Toronto. Check them out at UrbanAdventures.com , or try TourGuys.ca for other fantastic group or private tours around Toronto.