On our last day in Cambodia, we found ourselves in the sleepy town of Battambang – a couple hours drive from the Thailand border, and an 8 hours slow boat ride south west of Siem Reap.  Heavily influenced by the french colonial days, many of the buildings around town have parisian like balconies overlooking the streets, and architecture tours showing off this distinct style abound.  Looking for something new to try, we flipped through the Lonely Planet guide and found a small text box mentioning a bamboo train experience.

On our last day in Cambodia, we found ourselves in the sleepy town of Battambang – a couple hours drive from the Thailand border, and an 8 hours slow boat ride south west of Siem Reap.  Heavily influenced by the french colonial days, many of the buildings around town have parisian like balconies overlooking the streets, and architecture tours showing off this distinct style abound.  Looking for something new to try, we flipped through the Lonely Planet guide and found a small text box mentioning a bamboo train experience. Only 3km south of town, this tourist attraction is on the brink of extinction.  Cambodia doesn’t have much of a railroad system set up, and most public transportation is either by bus or shared taxis.  In the name of development, Cambodia is looking to rebuild many of the old railway lines. Although I could see the obvious benefit this would have to both Cambodians and tourists alike – the bamboo train of Battambang will most likely be eliminated due to safety concerns using the same railway tracks. 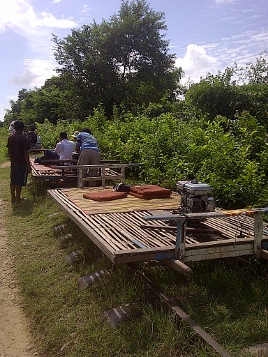 But for now, a 10 minute tuk tuk ride away from “downtown” Battambang, this attraction was one of my personal highlights of our Cambodian adventure.  A simple apparatus, the bamboo train is made up of 2 sets of train wheels (that look like barbells), and a bamboo platform, about 2m wide, and 3m long with a small motor attached to the back. The driver rides up beside the motor, and for $5 US each, tourists sit up on cushions to enjoy the 45 minute ride to a local village and back.

Starting off at a slow pace, the individual bamboo trains pick up speed quickly and soon we were racing down a rural railway line, watching rice farms, small houses, and the occasional cow being left behind.  It gets interesting when you come up against another bamboo train coming the other way.  There is no way to pass, so whichever bamboo train has the least amount of passengers needs to disassemble their train by lifting off the bamboo platform and removing the wheels from the tracks.  Placed on the narrow embankment, the other train is free to pass, although usually the other driver stops after passing by and helps the driver who had to remove his train from the tracks put back together his bamboo train.  It’s a quick process (thankfully, as it’s hot standing on the sides of the tracks without the breeze from the speed of the train cooling you off), and the trains are back on track in no time. 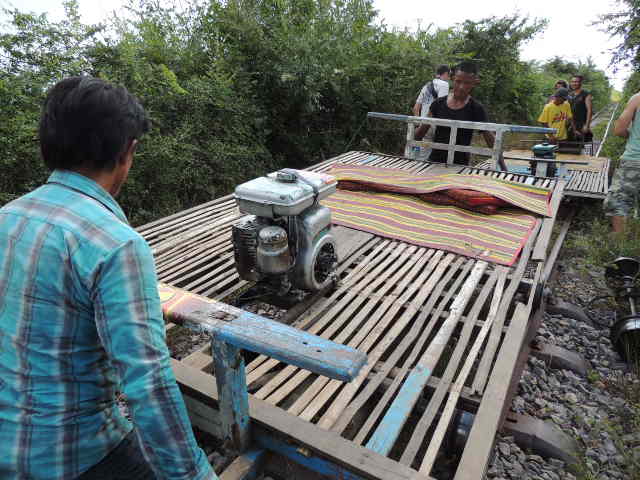 Disassembling our bamboo train to allow another to pass, Battambang Cambodia

We arrived at the village after about 15 minutes, and were greeted with the expected shop keepers encouraging us to visit their stores and buy a refreshment or two.  They know how to time it, as after 15 minutes in the hot sun, a cold water or beer is exactly what I wanted.  2 girls about 11 or 12 years old approached us and asked us if we wanted to see their local rice factory.  Having heard of this “unofficial” tour from another traveller we met up with in Sihanoukville, I happily went on the $1 tour, only a 2 minute walk from the tracks.  Asked the typical, “Where you from?”, “How old are you?” questions, we walked to their rice barn where they showed us the different styles of rice – brown rice only for the pigs and other farm animals, white rice for the people, and the husks from the rice removed before selling, and used as fuel for wood stoves. During the tour, 2 other children joined in, each of them full of information about the barn, the rice itself, and their lives in and around the small village.  The tour lasted less than 5 minutes, and totally worth every penny. 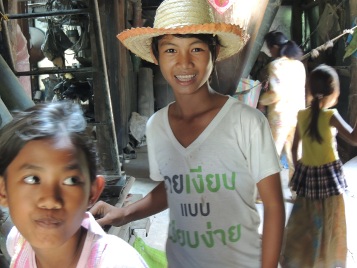 Back at the train tracks, we boarded our bamboo train back to the start, only having to disembark once on way to allow more tourists through.  The train is still used by local farmers, transporting their goods to and from other villages.  One of the trains in front of us were filming a documentary about the bamboo train, no doubt in the hopes that this amazing form of transportation is somehow preserved despite the threat of progress in the near future. 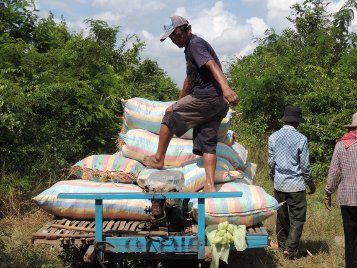 Local farmers loading up their harvest to take into town, Battambang Cambodia

Travellers tip: Offer to take your tuk tuk driver on the bamboo train with you.  Most locals have not experienced the train, as it is far too expensive for them to afford the luxury of being a tourist.  Its an experience no one should miss, as a tourist of Battambang, or as someone who’s lived there all their lives.