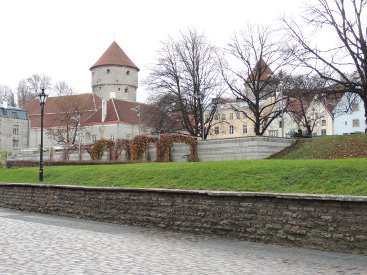 Since we booked our flights a few months in advance, and I was given free range to book whatever I wanted in advance from my “spur of the moment” loving husband. I researched all the ferry companies that ran daily trips over to Tallinn and decided Linda Line offered the best times, prices and speed for our night away in Tallinn. After being in Finland for a few days, and passing the ferry docks in Helsinki a couple of times, my husband asked me where we’d catch the Linda Line boat as we hadn’t seen it docked anywhere. He looked online at their website, only to discover to my OCD driven horror, that Linda Line had shut down it’s services for the season. Despite having a reservation number, a returned email later that week confirmed that our ship would not be sailing. A panicked rush of Google searches led to competing ferry lines that would be operating, although at a more expensive rate. With the hotel already booked in Tallinn, and our eagerness to see Estonia, we cursed Linda Line for being such jerks and rebooked with Viking Line on the way there, and Tallink on the way back. 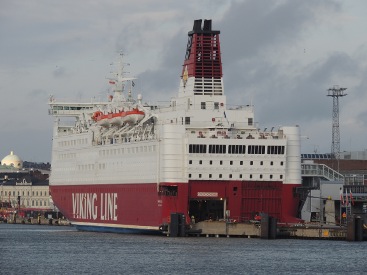 Buying so close to the sailing date, no “general admission” tickets were available, so we reserved an inside cabin for our two and a half hour journey south. It was lunch time as we set sail, so once our bags were left in our cabin, we went searching for a place to eat. We found a cafeteria a few floors up, and were pleasantly surprised to find a full kitchen with many varieties of food to choose from, from snacks to freshly grilled dinners. We wandered through the duty free/gift shop, then I went back to the cabin for a nap while by husband went to the upper decks to enjoy his book and a coffee. Our cabin had a couch that transformed into a bed, with a top bunk that you could pull down from the wall. There was a TV, and a full bathroom – small, but complete with a shower, toilet and sink. The sea was rough on the way over but the large ship handled it well, and I had no trouble falling asleep despite the constant rocking. We docked a couple hours later, and set out to find our hotel in the Old Town of Tallinn. When you first come into Tallinn from the harbour, one side of the city looks like a town from hundreds of years ago, dominated by large glorious churches and red roofed buildings surrounded by a large wall. The other side of Tallinn looks like any modern city, complete with skyscrapers and apartment buildings. A short walk from the harbour to the Old Town, we walked through one of the gates and began exploring the old cobblestone streets lined with tourist shops, restaurants and cafes. 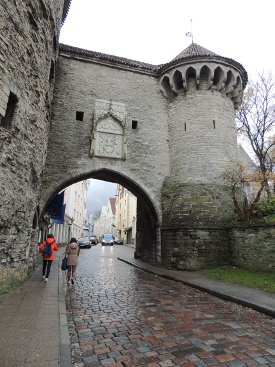 Easy to see why this is a popular stop with many cruise ships, I was eager to find our hotel to drop our bags off and go exploring. We stayed towards the south end of the Old Town, in a beautiful hotel called My City Hotel. 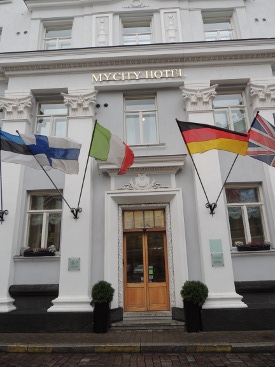 Grand entrance way, comfortable and stunningly designed rooms, a 4 star hotel in Tallinn was only a fraction of the cost of a room in Helsinki. 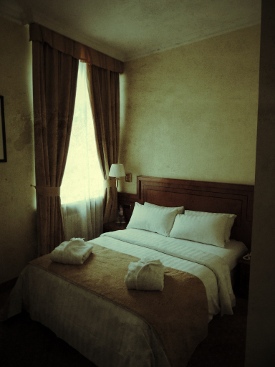 We grabbed a local map, and hit the streets hoping to wander and lose ourselves in this medieval paradise. 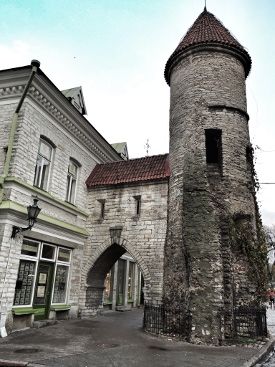 While on one of the many twisting cobblestone lanes, we came across tourists getting their picture taken with a statue of a chimney sweep.  Each would take their turn rubbing his buttons and his nose.  Snapping a picture of the statue, we later asked one of our waitresses about this unusual behaviour. 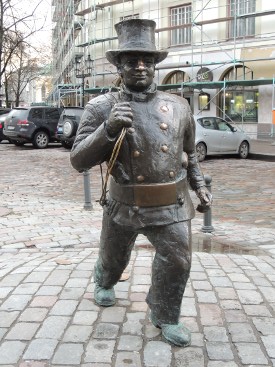 She told us it was good luck to rub the buttons of a chimney sweep, either a statue, or a real one!  She had no idea about the rubbing of the nose, but said that if you were a chimney sweep, you got used to people coming up to you and rubbing your buttons – all part of the job I guess.

The weather switched from sun to rain and back to sun many times throughout the afternoon, but taking shelter in one of the shops or cafes from the clouds only added to the romantic atmosphere. We stopped at Cafe Maiasmokk, tempted inside by their delicious looking pastries and coffee. 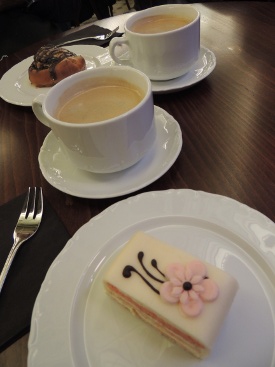 We continued on until we found a perfect place for dinner, the Olde Hansa. 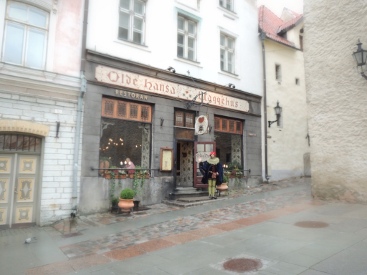 Staff dressed in medieval costumes beckoned us in, and we sat at wooden tables in a restaurant completely lit by candlelight and dined on a feast, complete with traditional berry schnapps and honey beer. It was a popular place for tourists and as cheesy as it was, I loved it. The food was decent, the servers were entertaining, and it completed the Old Town Tallinn experience. 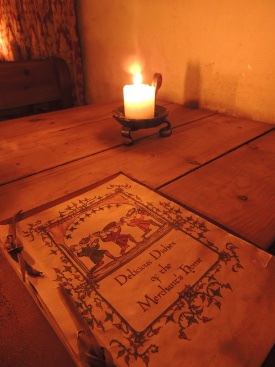 Once the sun had set, we wandered slowly back to our hotel passing by the seemingly never ending string of strange and unique bars – including one completely dedicated to the band Depeche Mode, and another filled with test tubes and science class beakers offering beer bongs on their menu. 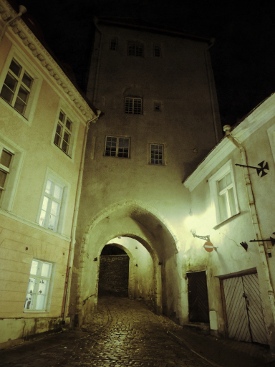 A nice break from the pricey Helsinki, Tallinn was a fun getaway, although I’m not certain I’d want to spend more than a night or two in this touristy city. The next morning we woke up late and opted for a taxi to take us back to the harbour. We hoped on board the much less crowded Silja Tallink ship, that offered “general admission” tickets and wi-fi for it’s passengers. 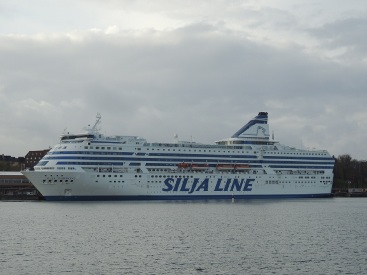 Although not as fancy as the Viking Line, we found a small cafeteria that had some prepackaged sandwiches and decent coffee, and sat and enjoyed the journey by sea back to Helsinki. It’s good to note that the Silja Tallink Line might dock at a different port on the west side of Helsinki, and not near the Market Square where many other companies leave from. Helsinki is an easy city to walk around so the inconvenience isn’t remarkable, but might save a surprise when you are disembark at a different port. Estonia wasn’t a country I thought too much about visiting, and if it wasn’t so convenient to get to from Finland, I’m not certain I would planned to visit it. I’m happy fate led me there and let me discover the old world town of Tallinn, despite my advance planning obsession habits that might not have successfully gotten me there.