A bitterly cold Saturday morning, and we are met by our guide Jason in front of Toronto’s Art Gallery of Ontario.  Bundled up under a gray snow cloud sky, we introduced ourselves and Jason gave a brief introduction to the Urban Adventure Tour: Kensington Market and Chinatown.  One of their “best sellers”, this 2 hour tour takes you through the two diverse communities, located less than a block apart in Toronto’s downtown core.

A bitterly cold Saturday morning, and we are met by our guide Jason in front of Toronto’s Art Gallery of Ontario (AGO).  Bundled up under a gray snow cloud sky, we introduced ourselves and Jason gave a brief introduction to the Urban Adventure Tour: Kensington Market and Chinatown. One of Urban Adventures “best sellers”, this 2 hour tour takes you through the two diverse communities, located less than a block apart in Toronto’s downtown core.

From the AGO, Chinatown begins just a few short blocks west along Dundas Street.  Signs quickly change from English to Chinese characters, with English translations following in much smaller texts, almost as an afterthought.  Our first stop is at the Lucky Moose Food Mart – a locally notorious store known for the owner taking on a thief who had continuously been stealing from him.  After being told by the police that there wasn’t much they could do without catching the thief in the act, the owner apprehended the thief, tied him up and locked him in delivery van until the police could arrive to arrest him.  The police arrested both the thief and the owner, charging the owner with forcible confinement.  The charges were eventually dropped, and the “Lucky Moose” law came into effect – allowing citizens to make citizen’s arrests with less restrictions.  The story even attracted the attention of our Prime Minister Stephen Harper, who paid a visit to the store and met with David Chen, the Lucky Moose owner. 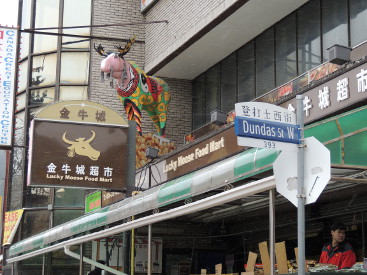 A brisk walk a few stores west, we hit Main Street Chinatown…also known as Spadina Avenue, where Spadina intersects Dundas Street West. Spadina Avenue is twice as wide as most streets in Toronto, and as such allows 2 lanes of traffic in both directions as well as streetcar tracks running both north and south in the middle of the street.  With what seems like hundreds of shops and restaurants along both sides of the street, going almost as far as the eye can see in either direction, Chinatown has always seemed like maze of confusion, and I never knew where to even start.  That is where Jason, our tour guide, stepped up and offered up his expertise in his old stomping ground.  We stopped in at a small restaurant on the west side of Spadina that specialized in Banh Mi – a Vietnamese sandwich made on fresh french bagettes and filled with cucumber, an asian style of radish, pate, cold cuts, shredded carrots and cilantro.  There are variations everywhere but ideally you are getting a submarine sandwich.  Having just started the tour, we weren’t quite hungry yet, but for $2 each, I am definitely going to make a trip back into Chinatown and sample one of the must try cheap eats. 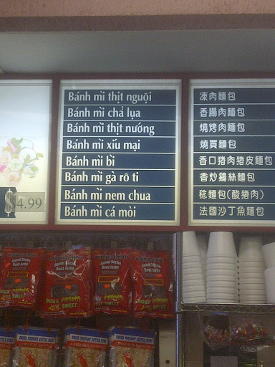 Cutting through what looked like an alleyway, but was actually a street, we walked down Glen Ballie Place – a hidden row of houses that is a strangely quiet escape from the bussel of Chinatown, only meters away. Originally built as temporary houses for the English contractors working on the booming city of Toronto during the late 1800’s, this small little known neighbourhood is an excellent segue into Kensington Market. 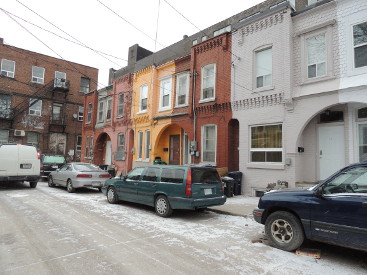 What is most interesting to note in both the alleyways and blank walls throughout both Chinatown and Kensington Market, is the number of spaces decorated with graffiti art.  Different from graffiti vandalism which usually just incorporated tags or throw-ups along walls, graffiti art is generally commissioned from the building owners and adds to the artistic atmosphere prevalent in both neighbourhoods.  This alley way below demonstrates the difference between the two types of graffiti – easy to see why graffiti artists are much different than the vandals looking to doodle with spray paint. 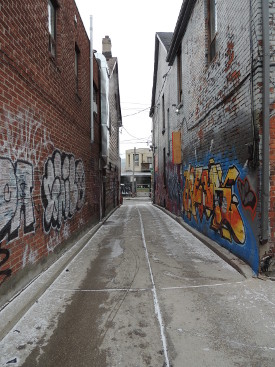 The graffiti art usually tells a tale, or leaves the viewer an opportunity to interpret the meaning of the painting.  Although just a few examples shown below, I am looking forward to looking at this temporary form of art during the summer during a Graffiti tour offered through tourguys.ca. 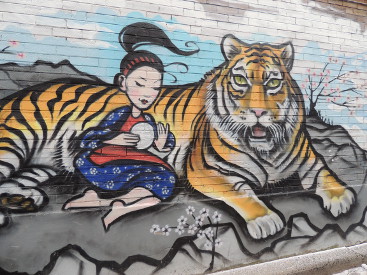 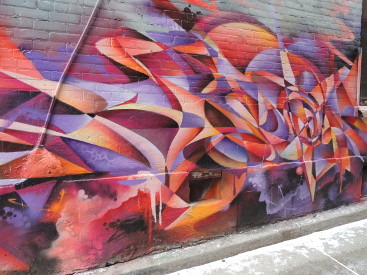 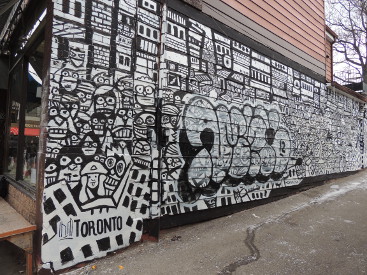 Kensington Market was originally populated by the English settlers to Toronto.  Old Victorian style semi-detached houses line the street, that usually include a peaked roof on both sides of the house, and a large bay window out from, showing off what would have been an English style sitting room.  After the English had saved up enough money to move elsewhere in the city, a large Jewish community moved into Kensington Market.  Seeing the sitting room at the front of the house as a waste of space, the new Jewish homeowners set up shops on the first floor of these houses, and had apartments in which they could live on the second stories.  Once the Jewish community saved up enough money to move north, Italian and Portugese immigrants flocked into Kensington…eventually Hungarian families, South American families, and anyone else immigrating to Toronto who didn’t speak a lot of English found Kensington Market to be their welcoming new home.  A very proud piece of Toronto’s multicultural history, Kensington Market became a place where it didn’t matter where you were from, or what language you spoke…this neighbourhood filled with many different cultures, and everyone was at different stages of the process of making this new city/country their home. Even today, the shops that line the streets of Kensington offer a taste of the world, including a South American shop selling Inca Cola from Peru, and a restaurant called the Hungary Thai – offering up a menu infused with both traditional types of cuisine. 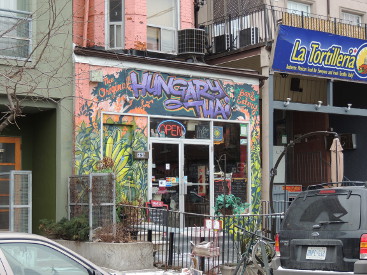 My favourite aspect of Kensington Market is that almost every business is independantly owned and operated.  There is no large corporation stores in the market, including no Starbucks or Second Cup.  There are dozens of independent coffee houses throughout, and the locals fully support their neighbourhood businesses. Many of the local restaurants buy off the local grocers, and in turn both businesses prosper.

We sampled some homemade buttertarts from a local bakery, and stopped for coffee/hot chocolate at one of the coffee houses – complete with old records for sale against one wall, comfy chairs and tables against the other, and artists’ works for sale displayed throughout the shop. 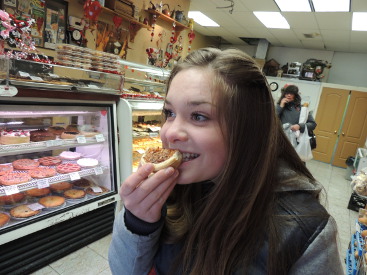 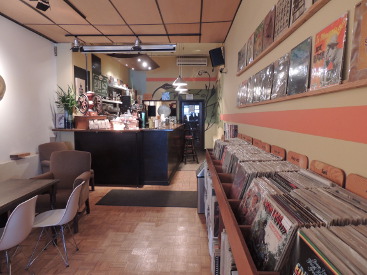 My personal highlight was finding the Grilled Cheese restaurant – a restaurant that has at least 12 different varities of my favourite sandwich – all made with gourmet cheeses from a local cheese shop, and different varieities of bread, from a local bakery.  Mixed with a daily batch of homemade soup, I could easily see how this place could be hugely popular, with both locals and visitors to the market. 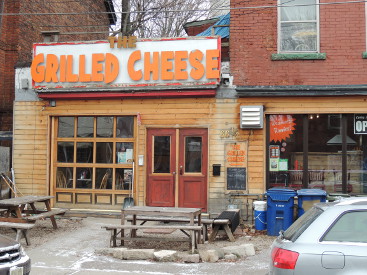 In the corner of one of the windows in the picture above, you can just make out a sign that says “We deliver to Ronnie’s”.  Who is this lucky Ronnie, and how does he get this exclusive delivery service?? Across the road, there is a pub called Ronnie’s.  During the summer, they have a small patio out front, and while enjoying a pint or two, you can either walk across the street and place your order for a Grilled Cheese special, or call it in from your cell phone if you are just too comfortable to get up.  And they deliver to you across the street.  Taking customer service to a whole new level! 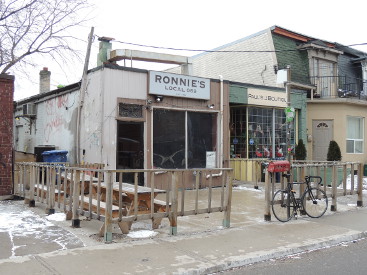 Even as a resident of Toronto, I love exploring local neighbourhoods I don’t get a chance to visit often.  Having a tour guide with me is a bonus, as usually they can point out unique sights you may have passed by a million times, but never really noticed.  For example, these scuptures found at every street leading into the market – all featuring a combination involving 2 of the following: a kitchen chair, a cat, or a globe…worth taking the tour just to figure out what it all means. 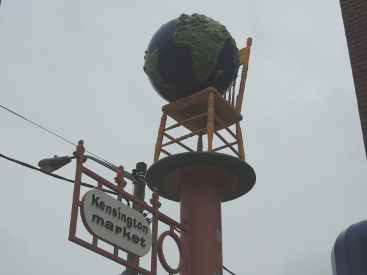 Part of my quest in discovering what I can recommend to visiting tourists when they come to Toronto, I would highly suggest a stroll through both Chinatown and Kensington Market – for great food selections, a good place to buy unique gifts for yourself or others, and a fun atmosphere to be in, even in the cold cold days of winter.