I find motivation all around me to plan a new vacation – my morning coffee inspires future visits to the coffee plantations of Cuba or Columbia.  On my drive to work the other day, I saw someone making their way through traffic on a Vespa – somewhat out of place on Toronto streets, yet I found myself daydreaming of exploring the small streets in a town in Italy.  I got lost for a few moments imagining where my Shiraz grapes grew as I enjoyed a glass of wine that night…well, you get the idea.  I think A LOT about travelling.  It wasn’t much of a surprise to me when I found myself at the Art Gallery of Ontario, surrounded by beautiful paintings by Cornelius Krieghoff, wondering what Montmorency Falls might look like close up. 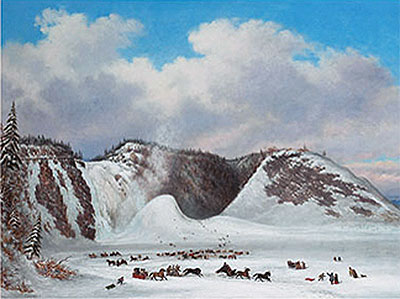 A few weeks later, I took a roadtrip east (mostly exploring Quebec Brewpubs, but a little sightseeing didn’t hurt either) and we ventured just 12km outside of Old Quebec to find Montmorency Falls (Chute Montmorency in french).  The first waterfall we passed heading up to Montmorency was Le Voile de la Mariee (Bridal Veil Falls).  Lesser known than it’s towering neighbour Montmorency, Bridal Veil falls comes with a ghost story that makes it an attraction in itself.  In the mid 1700’s, a bride about to married, finds her husband-to-be killed in battle a few days before the wedding.  In grief, she puts on her wedding dress and throws herself over the falls.  Her ghost is reported to be seen in the mists of the falls. (Insert spooky ghost like music here).  From what I hear, the tour guides tell a more dramatic version of the ghost story on site for tour groups in the summer, but in the dead of winter, I worried more about icy walkways than haunting ghosts. 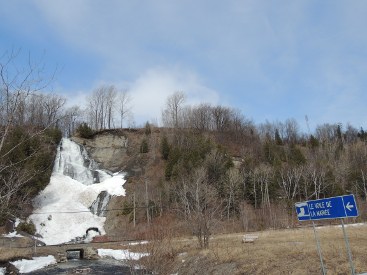 At the base of Montmorency Falls is an information centre, and a bridge you can walk across to view the falls head on.  The ice and snow were just starting to melt, so the legendary “Sugar Loaf” formation of ice was still prominent at the base of the waterfalls. 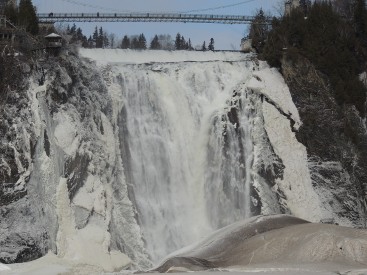 Driving up the mountain to the top of the falls, we found Montmorency Manor – a beautiful old house transformed into a visitors centre complete with a restaurant and gift shop. 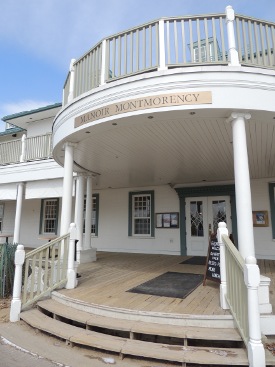 Being midweek, there wasn’t a lot of people around and we pretty much had the grounds to ourselves to explore.  Walking along the pathway leading to the falls, the trees were all still decorated with a coating of ice, and long icicles hung from the sides of the cliff walls. 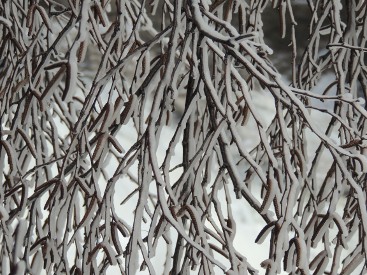 It’s been a very long winter this year and up until I visited Montmorency, I failed to see the beauty of the season.  Despite the cold, Montmorency shows off winter in all it’s glory and I was happy to experience Montmorency for the first time in it’s “off-season”.

What’s sightseeing if it’s not filled with some sort of adrenaline filled excitement?  At the top of Montmorency, there is a suspension bridge.  Easy to cross, until you notice it’s covered in ice, and loud rushing water is quickly flowing just a few metres below you.  Tightly holding onto the sides of the bridge, I inched my way across very slowly. 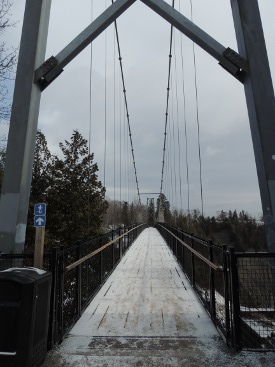 Note the lack of people on the bridge.  Yet, I’m glad we did it – the view from the top was incredible. 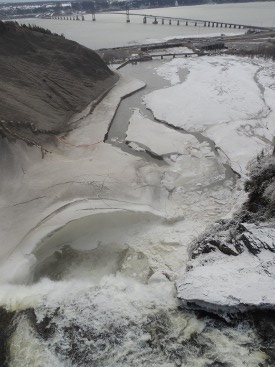 Now for the facts…Montmorency is 84m high, and the highest waterfalls in the province of Quebec.  My stepdaughter and niece were right – Niagara Falls is 30m shorter than Montmorency, although Niagara is much wider.  During the summer months, there is a staircase that runs up the side of the falls to allows tourists to see the falls from a different perspective.  Rumour has it there is also a fireworks competition that uses the waterfalls as a backdrop.  I see another roadtrip in my future.